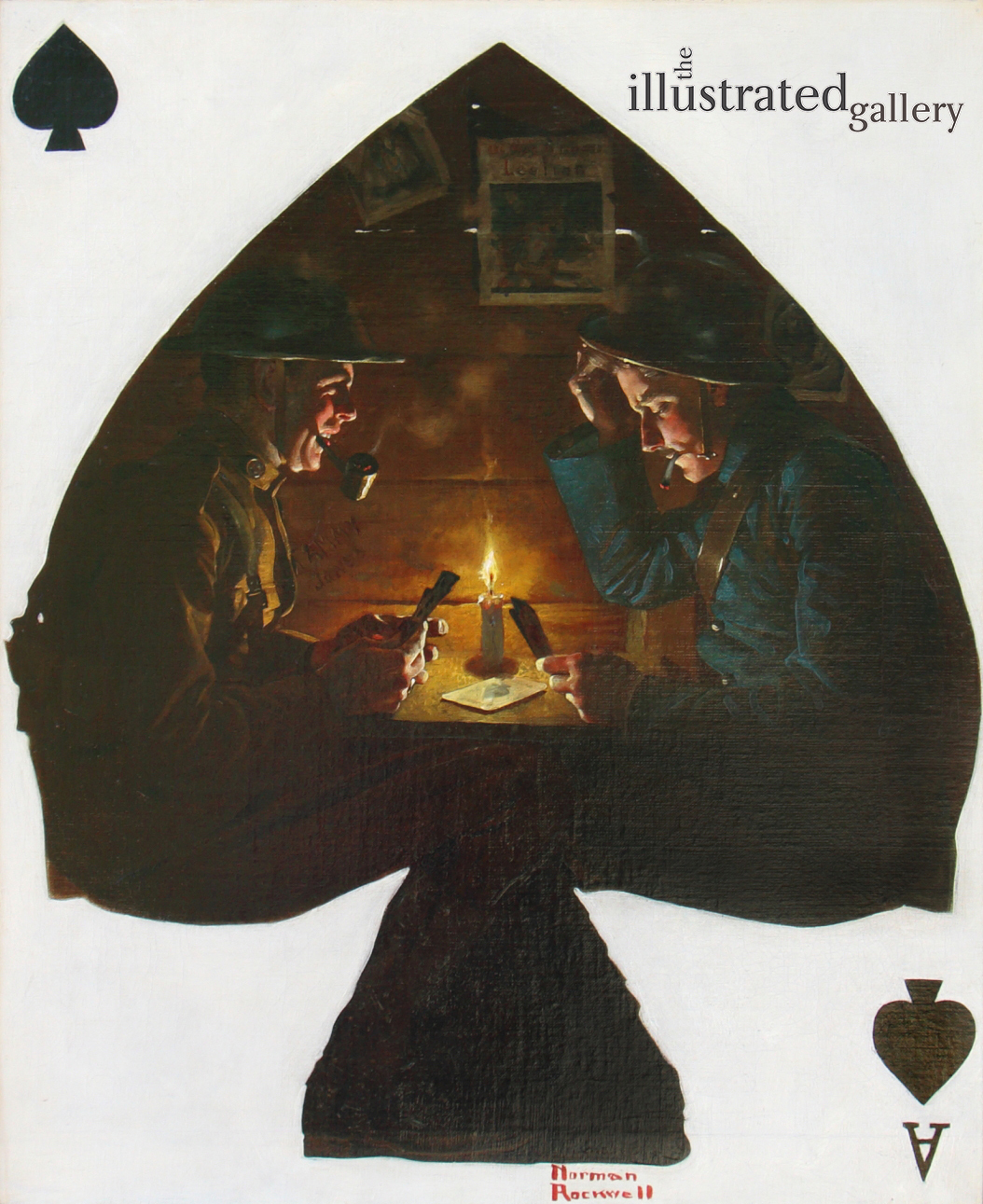 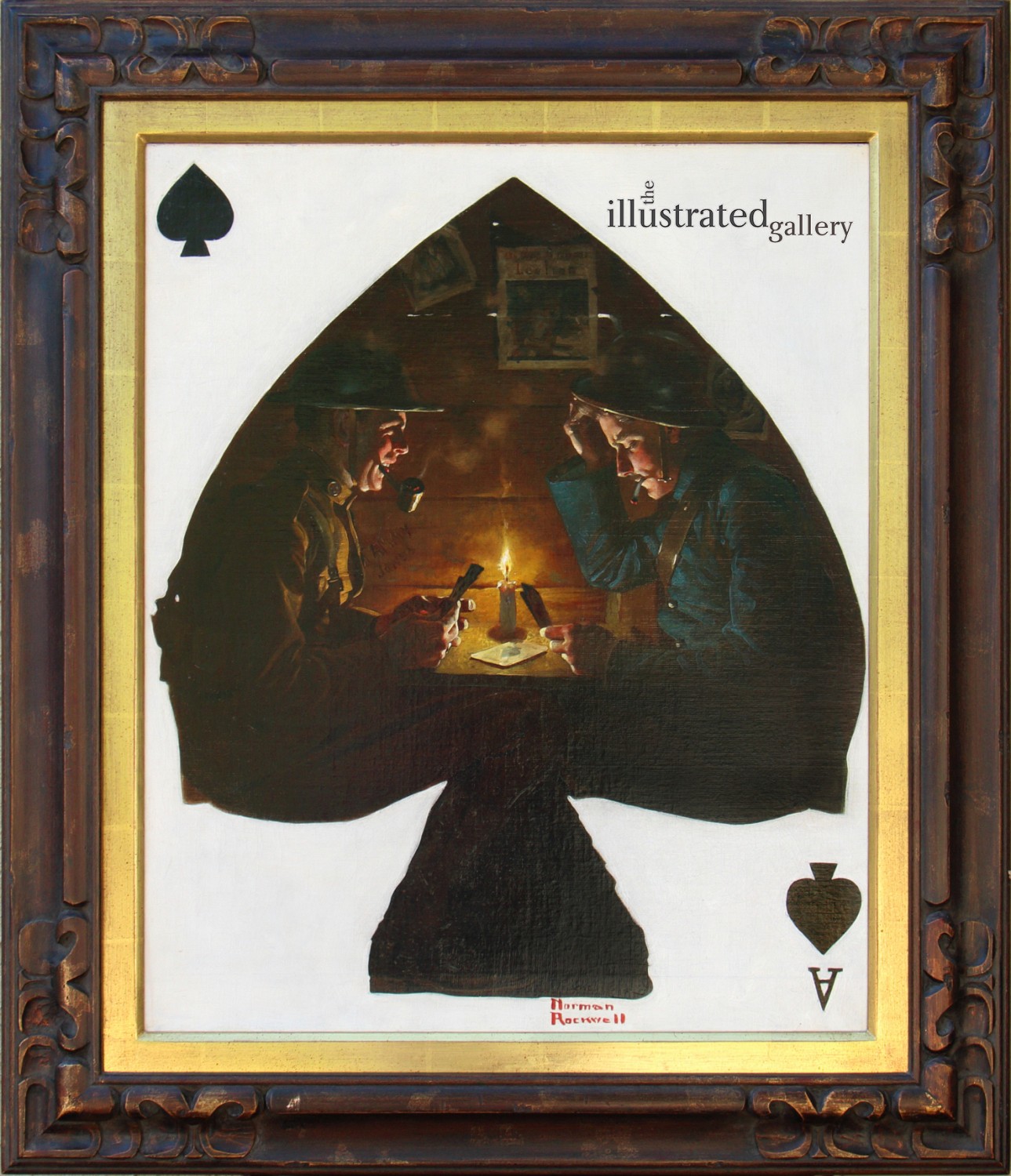 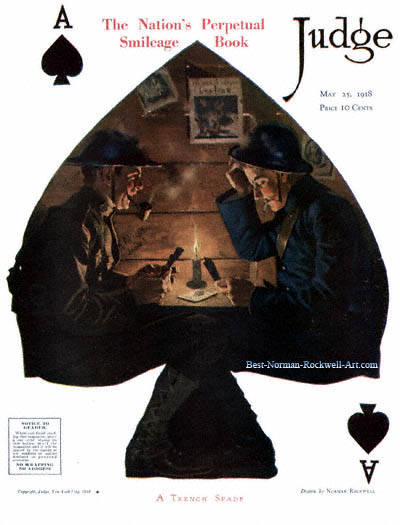 This is a poignant scene depicting two young World War I soldiers passing time in their barracks playing a game of cards. Despite the atrocities the two men might have witnessed that day, they can forget the war for a moment and enjoy their game within the safe confines of their camp. The man at left smiles and enjoys his pipe, as his friend considers his next move. The entire scene is illuminated by one candle in the center of the table that infuses the entire scene with a warm glow. Some of Rockwell's wartime scenes are among his most moving, and best- known works. These images brought a sense of comfort and pride to the friends and family of soldiers away at war. The timeless appeal of Rockwell's art is that it continues to reassure and touch Americans of every generation that experience the strife of war. Christopher Finch writes: "Rockwell is far from being a warlike person; he is, on the contrary, a gentleman in the literal sense of the word. Yet the war brought out the best in him and turned him toward the naturalistic portrait of home-town America which he put to good use in the decades that followed. His immediate contribution to the war effort on the home front was quite considerable. What is most important about this period, in relation to his career as an illustrator, is the fact that he was given this opportunity to prove to himself and to others that he was capable of dealing with serious subjects without abandoning the human touch which had always been his trademark." (Norman Rockwell's America, New York, 1975, p. 200) Born in 1894 in New York, Rockwell witnessed the height of Impressionism as well as the development of Cubism, Surrealism and Abstract Expressionism. He traveled to Europe to study the art of Pablo Picasso and witnessed the move toward Modernism in America by Jackson Pollack and Mark Rothko, among others. Despite the trends of the day, however, Rockwell chose to pursue a career as an illustrator. Over the course of seven decades, Rockwell produced more than eight hundred magazine covers and ad campaigns for over 150 companies. In doing so Rockwell became as ubiquitous to the American public as the images he created: "His images convey our human shortcomings as well as our national ideals of freedom, democracy, equality, tolerance and common decency in ways that nobody could understand. He has become an American institution. Steven Spielberg recently said, 'Aside from being an astonishingly good storyteller, Rockwell spoke volumes about a certain kind of American morality.' It is a morality based on popular values and patriotism, a morality that yearns above all for goodness to trump evil." (L.N. Moffatt, "The People's Painter," in M.H. Hennessey and A. Knutson, Norman Rockwell: Pictures for the American People, New York, 1999, p. 26) American illustration holds a special place within the context of American art. Before television entered the American home, newspapers and magazines were the primary news sources for the nation. The artists who illustrated these periodicals had a great deal of influence on public opinion and on the way Americans perceived their nation. Norman Rockwell did more than simply fulfill his commissions; he understood his advantageous position and put his best efforts into his important work. He stated: "No man with a conscience can just bat out illustrations. He's got to put all of his talent, all of his feeling into them. If illustration is not considered art, then that is something that we have brought upon ourselves by not considering ourselves artists. I believe that we should say, 'I am not just an illustrator, I am an artist.'" (as quoted in J. Goffman, The Great American Illustrators, New York, 1993, p. 122) The scope of Rockwell's appeal is still expanding as new generations live through the same quintessentially American types of experiences that Rockwell so faithfully depicted in his art. "For six decades, through two World Wars, the Great Depression, unprecedented national prosperity and radical social change, Norman Rockwell held up a mirror to America and reflected its identity through the portraits he painted of its people...Rockwell's paintings have done more than just sell magazines. They are in a large measure the visual memory of a nation." (V. Crenson, Norman Rockwell's Portrait of America, New York, 1989, p. 9) Covering a sweeping range of topics, including the difficult subject of war, Rockwell helped forge a sense of national identity through his art.