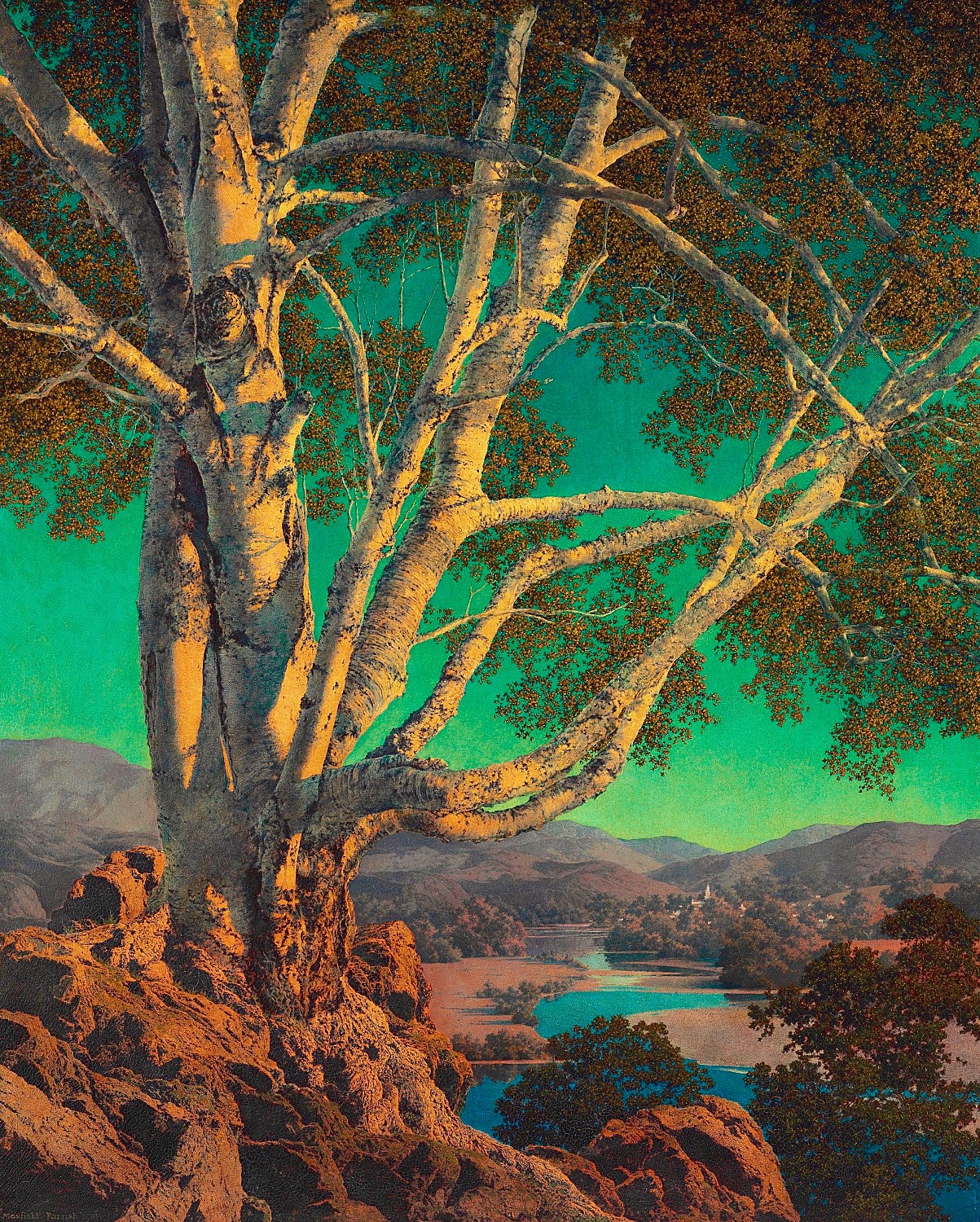 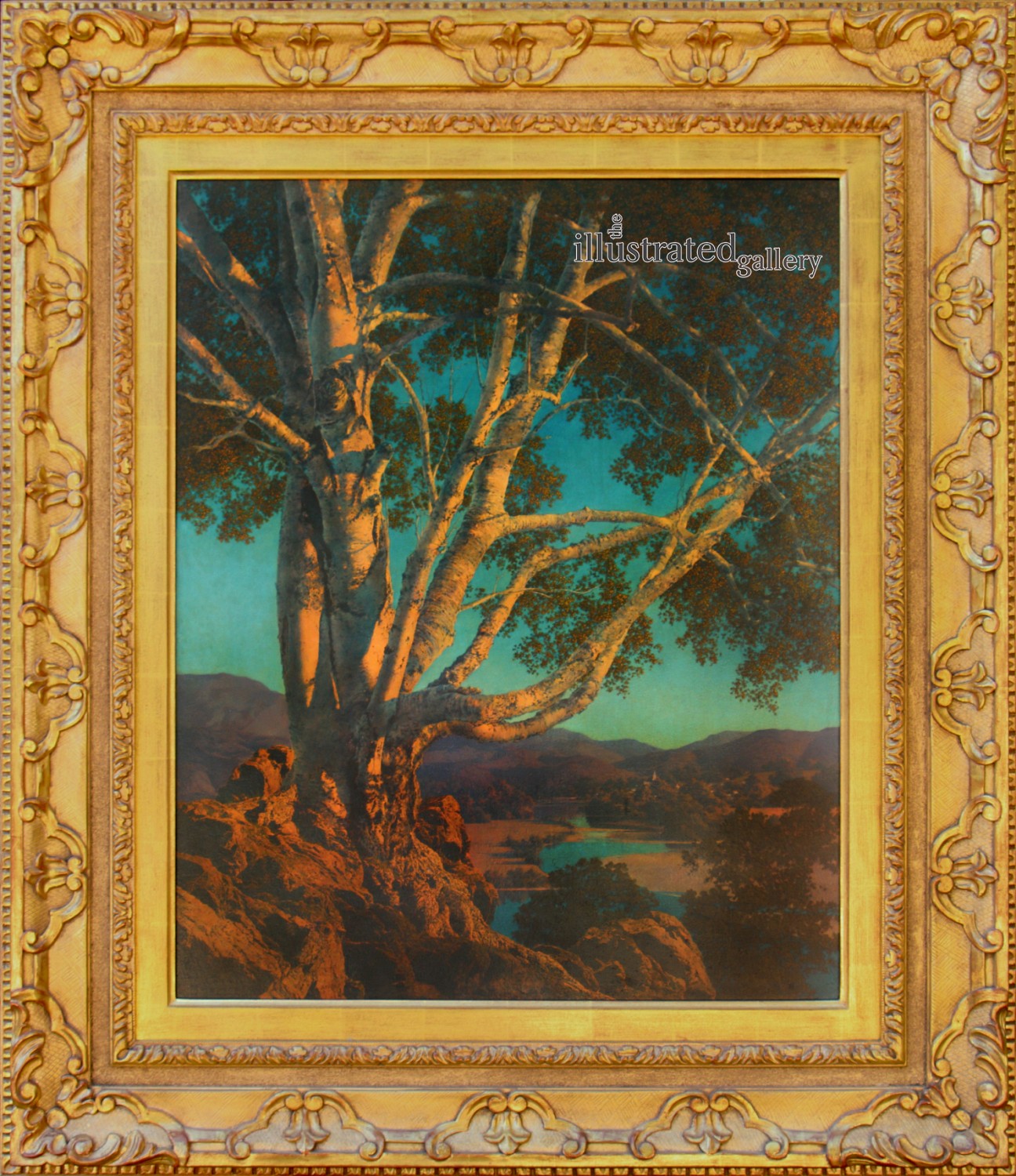 This piece was published as the illustration for a 1940 Brown and Bigelow calendar as Evening Shadows.

While celebrated for his widely published illustrative works of fantastical subjects, Maxfield Parrish's true passion was capturing his surrounding landscape in bold tones and striking compositions. Although he experimented with landscapes throughout his career and incorporated elements into many of his commercial works, it was not until 1930, after he had achieved commercial success and financial security, that Parrish turned to paint exclusively landscapes without figures. While he relished his newfound artistic freedom, he continued to use his signature technique and palette that had won him much praise. This combination gave new life to Parrish's work, resulting in magical dreamscapes such as Old White Birch, in which his masterful handling of paint and keen understanding of color are at their zenith. Old White Birch, also known as The Old Birch Tree, depicts the distinctive tree native to Parrish’s home state of New Hampshire and is a tree typical in the New England landscapes that he so appreciated. "Maxfield Parrish often said, ''Only God can make a tree.' True enough, but I'd like to see Him paint one.' The statement reflects the kind of painting skill and knowledge of nature that Parrish knew was required for painting trees as he painted them--with subtle variations of color and gradations of light and shadow, accurately depicting light filtered through the layers of precisely detailed foliage." (as quoted in C. Ludwig, Maxfield Parrish, New York, 1973, p. 177) In the present work, the evening light from the setting sun creates dramatic shadows, and indeed the title given by the original publisher for this work was Evening Shadows. The birch’s branches are shown covered half in deep violet shadow and half in the warmly lit, pale bark that glows orange in the sun. The Connecticut River, the longest river in New England that runs through New Hampshire, Vermont, Massachusetts and Connecticut, is depicted in the distance, and beyond the river are rolling violet hills. As noted by Parrish scholar Alma Gilbert, who considers Old White Birch one of the best works of the artist’s career, Parrish wrote about the present work in a letter to his secret lover Nancy Roelker in the summer of 1937, “‘I have spent the day retreating to the one thing that comforts me when I'm away from you: when I sit down to paint. I brought out to finish the work that has been waiting for me in the studio. It has had a long rest and I'm making great improvements to it, seeing it with fresh eyes after having spent an idyllic summer month with you living nearby.’ The painting he’s working on is Old White Birch which became one of the ten best of his career.” (as quoted in Maxfield Parrish: The Secret Letters, San Pedro, California, 2012, p.78) Central to Old White Birch’s beauty is Parrish's meticulous and time-consuming process of painting with glazes and his restrained use of bold pigments. Influenced by the Old Master painters, this was a meticulous process that resulted in magnificent luminosity and intensity of color. The artist expressed his aims concerning color, "Probably that which has a greater hold on me than any other quality is color. I feel it is a language but little understood; much less so than it used to be. To be a great colorist that is my modest ambition. I hope someday to express the child's attitude towards nature and things; for that is the purest and most unconscious." (Maxfield Parrish Papers, Hanover, New Hampshire) Parrish then repeatedly layered pure pigment and varnish to achieve a heightened vibrancy of colors and smooth, richly luminous surface. Old White Birch's enamel-like saturation and intensity of hues is a trademark of Parrish's work. Parrish's signature shades of deep blues and violets create a beautiful contrast with the softly radiant orange that bathes the lit side of the branches. In 1936, Parrish began painting landscapes for calendars by the Brown & Bigelow Publishing Company, and he would continue illustrating their calendars for 27 years. For the first five years of this partnership, Parrish painted one landscape for the calendar annually, including the present work that was published in 1940. Later he provided two illustrations annually—one for summer and another for winter. "Three landscapes were submitted to Brown and Bigelow in 1937 for consideration as possible future calendar subjects. The selection committee decided to use one of them, The Country Schoolhouse, in the 1940 calendar line and to make plates of the other two, The Old Birch Tree and New Hampshire, to be put in storage for future use. As it happened, The Old Birch Tree (Brown and Bigelow title: Evening Shadows) was used in the 1940 line, New Hampshire (Brown and Bigelow title: Thy Templed Hills) in the 1942 line, and The Country Schoolhouse was never published.” (C. Ludwig, Maxfield Parrish, New York, 1973, pp. 175, 177)

Old White Birch (aka: Evening Shadows) was Maxfield Parrish’s favorite landscape. This was painted circa 1937. This large oil on masonite measures 30 3/4″ x 25″. It is signed with a full signature at lower left. This painting has been owned by only four individuals: Austin Purves, the former owner of Daybreak, the owner of the Stanford Court Hotel, San Francisco, then acquired by the current owner through Christie’s, New York.