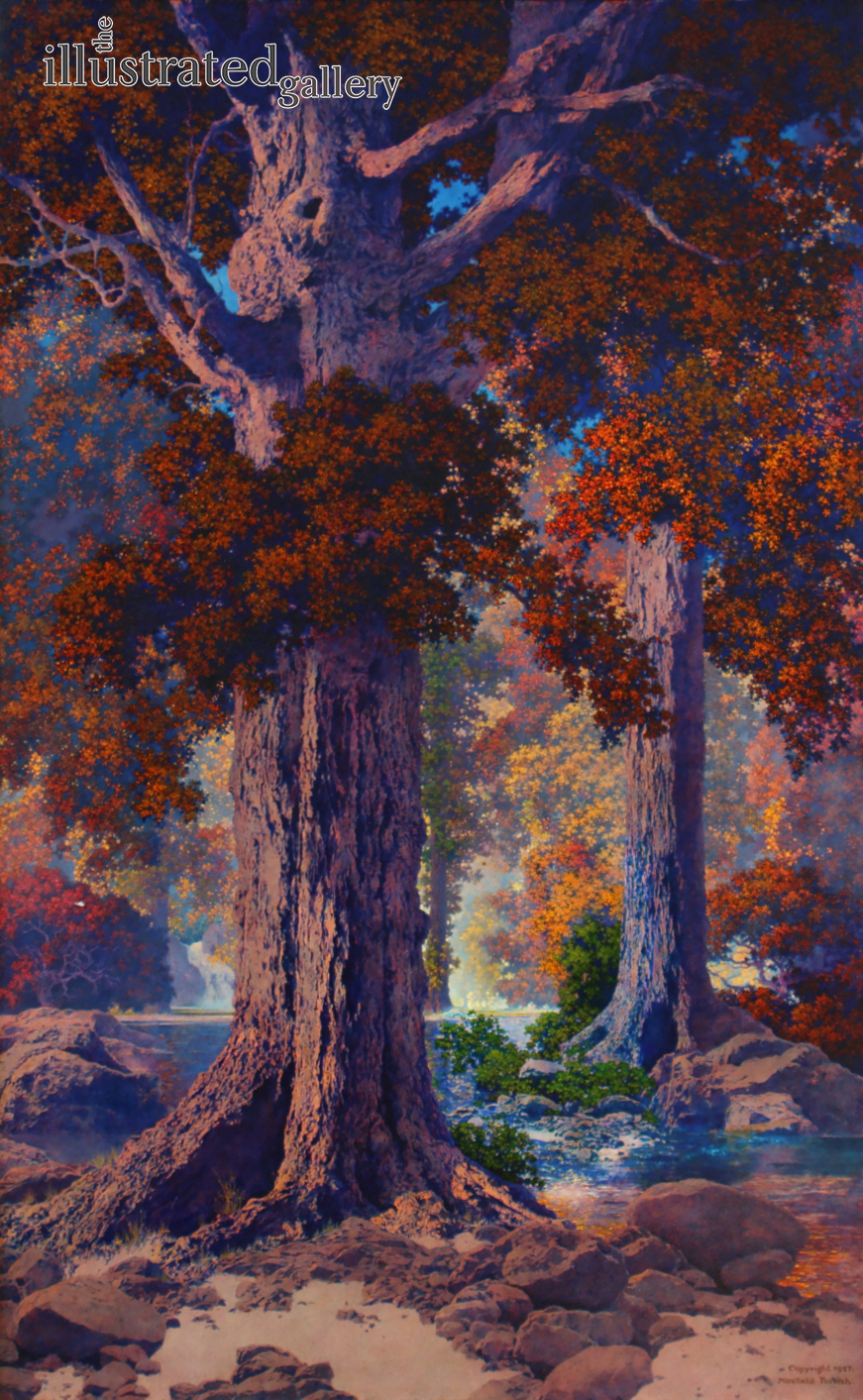 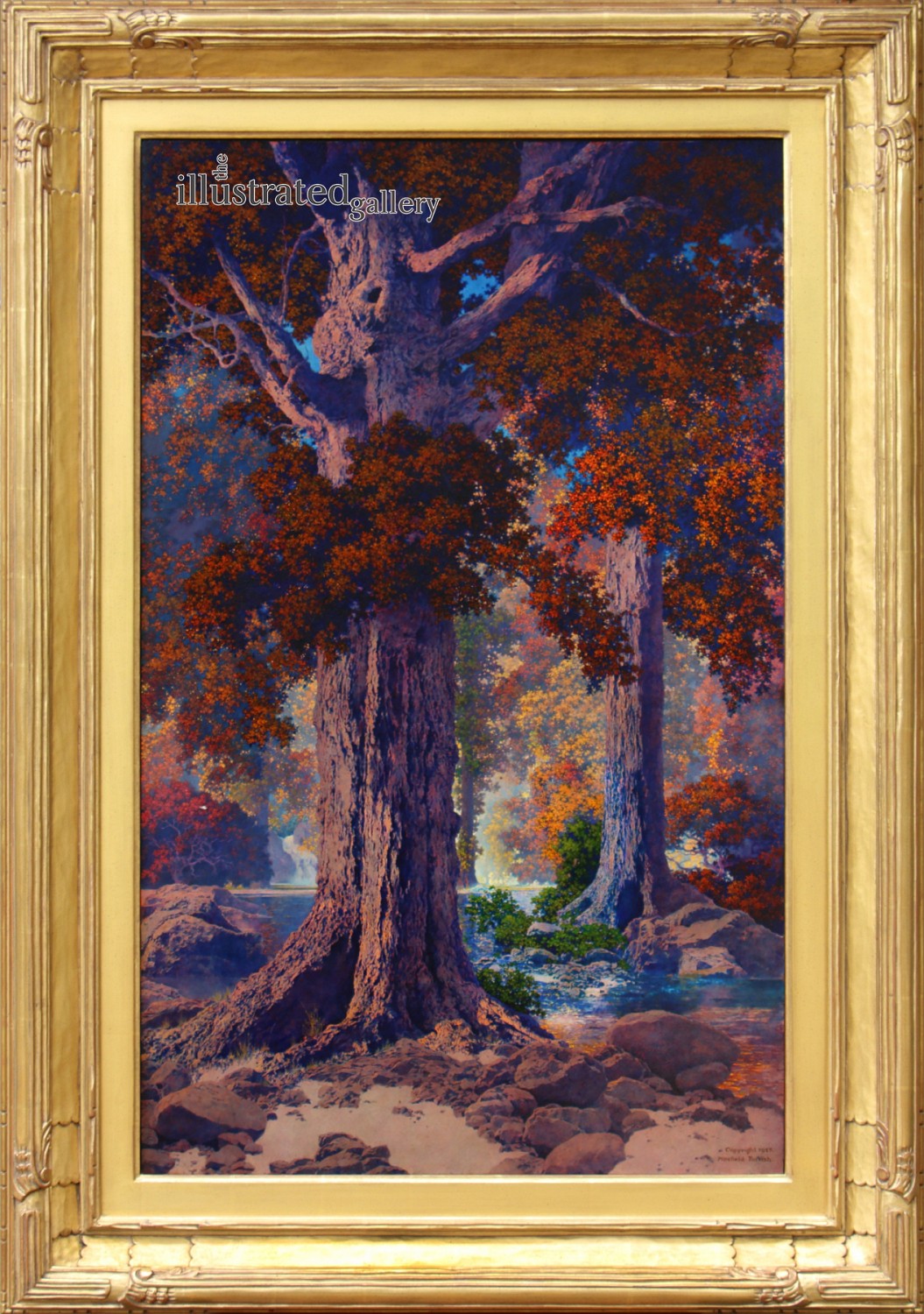 During the early 1930's, Maxfield Parrish made an important decision. He was going to give up figurative painting to paint what he enjoyed most: the pure landscape. He was growing increasingly disenchanted with producing paintings exclusively for the art-print trade. To see if he could transform the images that he had done either for the very popular Mazda calendars or for book illustrations, he selected the painting of the giant "Atlas" in the 1908 book "Tanglewood Tales" by Nathaniel Hawthorn. He began the alteration

by removing the figure of the giant, thus transforming the work into a pure landscape. The "Atlas" had originally been done as an oil on canvas and the artist felt that mounting the canvas on panel would be a more satisfactory working surface if he wanted to transform it into a landscape. Thereafter, the second piece on which he continued experimenting was a straight oil on panel, which he felt would lend itself better to the transformation into a pure landscape. He selected the 1928 oil Dreaming which he had done for the House of Art. He wanted to transform that painting and it is now known as "Dreaming/ October". The artist was instantly pleased with working

on a panel instead of canvas when it came to altering a painting. That second experiment gave him the courage to take more finished popular pieces done as oils on panels, such as three of the Mazda calendars: "Golden Hours" (1927), "Sunrise" (1931), and "Moonlight" (1932) and convert them into his favorite theme: pure landscapes. Once the publisher returned works after being printed, the artist contacted his friend, New York federal appeals court jurist, Learned Hand, who had allowed his two comely daughters to pose for some of the very well-known Mazda series calendars such as "Contentment", "Golden Hours", "Sunrise", and "Waterfall". He informed the judge that he had selected "Golden Hours" to transition away from a figurative work and make it a focus on his passion for landscapes. The judge agreed with him.

He began with "Golden Hours" (1927), the last piece that had been a commercial success for Parrish for which the Learned Hand girls, Frances and Constance Hand, had posed. He renamed the painting "Autumn Woods". He was so pleased with the achievement, that he contacted the press and gave his famous "Girl on the rock" interview to the Associated Press April 27, 1931.

"I'm done with girls on rocks! I've painted them for thirteen years and I could paint them and sell them for thirteen more. That's the peril of the commercial art game. It tempts a man to repeat himself. I'm quitting my rut now while I'm still able.....there are always pretty girls on every city street, but a man can't step out of the subway and watch the clouds playing with the top of Mt. Ascutney. It's the unattainable that appeals. Next best thing to seeing the ocean or the hills or the woods is enjoying a painting of them."

This decision to move away from figurative works to focus on his passion for the landscapes allowed Maxfield Parrish's works to transition from illustration into the realm of fine art. We would like to extend our thanks to Alma Gilbert-Smith for her assistance in cataloging and authenticating this work.