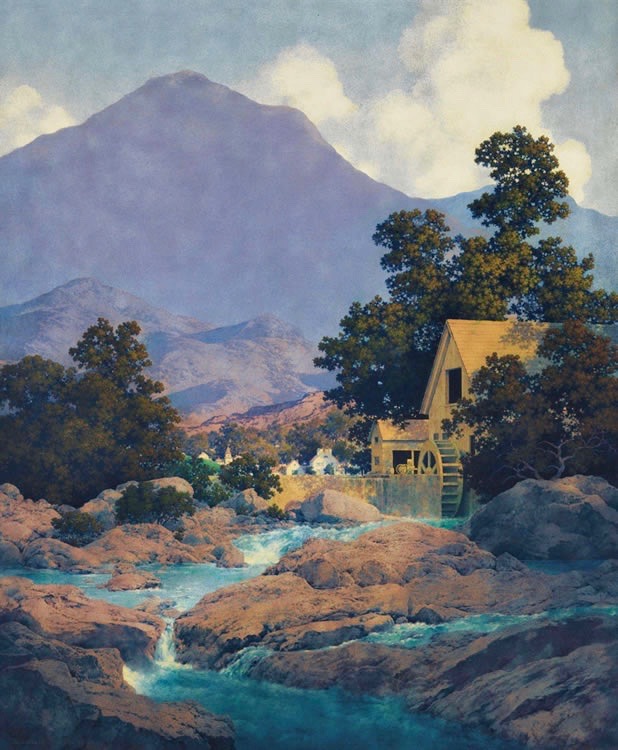 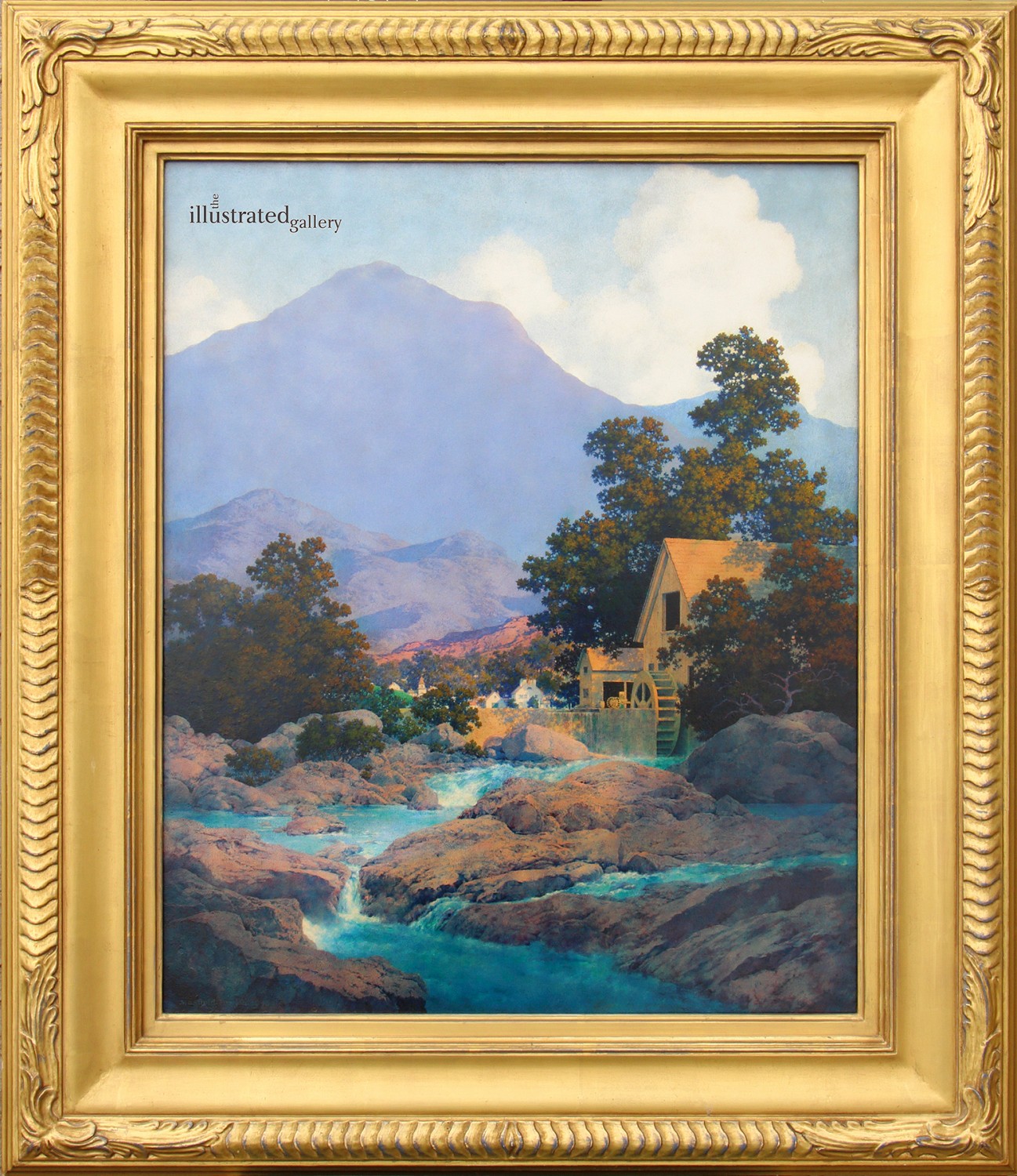 Signed and dated 'Maxfield Parrish 1942' (lower left)--signed and dated again and inscribed with title and '#1348' (on the reverse). Although Maxfield Parrish consistently incorporated landscape elements into his compositions, it was not until the 1930s when he began to approach it as his primary subject. Painted in 1942, The Old Mill is a superb example of Parrish's mature work, exhibiting many of the most compelling features of his celebrated style and meticulous technique. The present landscape, with a sky full of idyllic white clouds and a vividly-hued babbling stream, was featured as the summer illustration in a 1944 Brown & Bigelow calendar under the title Thy Rocks and Rills. Parrish began experimenting with landscape painting in the 1890s, painting and sketching around Cape Ann, Massachusetts and introducing landscape elements into his magazine and book illustrations. The turn of the century brought two consecutive commissions from Century Magazine, which had a profound effect on his landscape painting. During the winters of 1901-02 and 1902-03, Parrish traveled around Arizona to produce a series of paintings for Ray Stannard Baker’s article “The Great Southwest.” Parrish was immediately fascinated by the region’s brilliant range of color and dramatic light, both of which created impressive effects against the unusual terrain. As Coy Ludwig explains, “the southwestern sunrises and sunsets, with their reflections of brilliant orange hues and shadows of purple and blue, and the craggy terrain of the canyons became forever a part of Parrish’s artistic vocabulary.” (Maxfield Parrish, New York, 1973, p. 171) In between trips to the Southwest, Parrish went on another influential excursion, this time to Italy where he spent three months observing and gathering material to illustrate Edith Wharton's Italian Villas and Their Gardens. The subtle light and coloring Parrish found in Italy served as a balance to the dramatic topography and atmosphere of the Southwest. As in his best landscapes, the influence of both these Southwestern and Italian sojourns can be seen here in the present work. While the terrain and structures of The Old Mill indicate a New England landscape, the blue-violet mountains and pinkish-orange highlights are particularly reminiscent of Parrish’s Southwestern palette. In 1936, Parrish began painting landscapes for calendars by the Brown & Bigelow Publishing Company, and he would continue illustrating their calendars for 27 years. For the first five years of this partnership, Parrish painted one landscape for the calendar annually. Later he provided two illustrations annually—one for winter and another for summer—including The Old Mill. “The dimensions of many of Parrish’s landscapes painted in the 1930s were around 30” x 24”, but in the early 1940s he began to make them about 22 ½” x 18”, as he felt that his smaller paintings seemed to him more aesthetically successful than the larger ones. It was a wise decision, for his brilliant, enamellike surfaces and intricately detailed subjects called for the smaller size.” (Maxfield Parrish, p. 177) Parrish’s smaller scale works very successfully for the composition in the present work, where the broad areas of pigment depicting the mountains, clouds, and sky are balanced by the intricate complexity of the lower half of the composition. The prominent structure is the mill, tucked into large leafy trees, while a series of village buildings in the distance carry the viewer further into the composition. The flowing turquoise water falls in rapids through the rocks, until it floods into the foreground and off the bottom edge of the canvas. The prominently-featured large trees and rocks are painted in a manner unique to Parrish, using cut-out silhouettes, and this technique can be said to be the single most common element of his landscapes. The mill is also painted in dramatic silhouette, down to the smallest detail of wheel spokes set against a dark doorway. Central to The Old Mill’s beauty is Parrish’s time-consuming process of painting with glazes and a controlled use of bold pigments. Influenced by the Old Master painters, this was a meticulous process that resulted in magnificent luminosity and intensity of color. The Old Mill exhibits all of the hallmarks in subject and technique that are found in Parrish’s best landscape paintings. Parrish explained his approach to landscape painting, which comes to fruition in The Old Mill, “I feel that the broad effect, the truth of nature's mood attempted, is the most important, has more appeal than the kind of subject. ‘Broad effect’ is a rather vague term, but what is meant is that those qualities which delight us in nature--the sense of freedom, pure air and light, the magic of distance, and the saturated beauty of color, must be convincingly stated and take the beholder to the very spot. If these abstract qualities are not in a painting it is a flat failure.” (as quoted in Maxfield Parrish, p. 175).