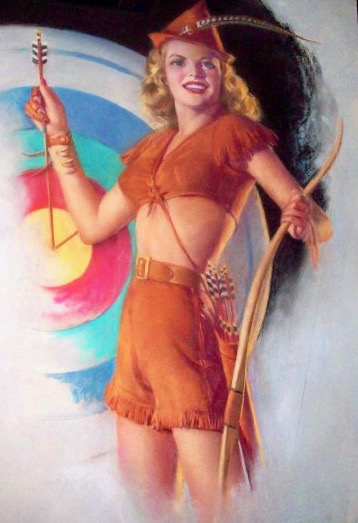 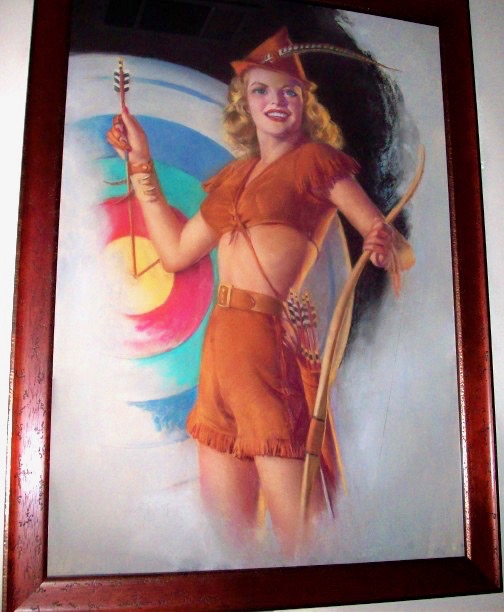 Zoe Mozert created several pastel paintings for use in the 1946 movie, "Never Say Goodbye", starring Errol Flynn, Eleanor Parker and Peggy Knudsen about a calendar artist trying to paint the perfect pin up. A Zoe Mozert pastel strikingly similar to this one prominently appears at the beginning of the movie. The model in this pastel is the actress from the movie, Peggy Knudsen.

Zoe Mozert, born in Colorado Springs in 1907, was the most successful and well known female calendar artist of her time. She was born Alice Adelaide Moser, but when she was old enough, she changed her name to Zoe Mozert because she felt that she could never become famous with such a name. In 1941, Brown and Bigelow Calendar Company signed her to an exclusive calendar contract. During the war, her pin-up series for Brown and Bigelow called Victory Girls was published both in calendar and mutoscope card form. By 1950, she was considered among the "big four" at Brown and Bigelow, taking a place alongside Gil Elvgren, Rolf Armsgtrong, and Earl Moran. Often her own model, Mozert is noted for depicting realistic looking young women with individual features and personalities, while rejecting the sexy girl cliches that were popular at the time. Her cover portraits of Hollywood starlets for such publications as "Romantic Movie Stories" and "Screen Book" were particularly popular, but she also contributed covers to such periodicals as "American Weekly" and "True Confessions".

While the bulk of her work, including such deliriously romantic nudes as "Moonglow" and "Sweet Dreams" was calendar-oriented (primarily for Brown & Bigelow), Mozert also made a mark as a movie poster artist, notably for Carole Lombard's "True Confession", and the notorious Jane Russell / Howard Hughes "The Outlaw". She died in Arizona on February 1, 1993.