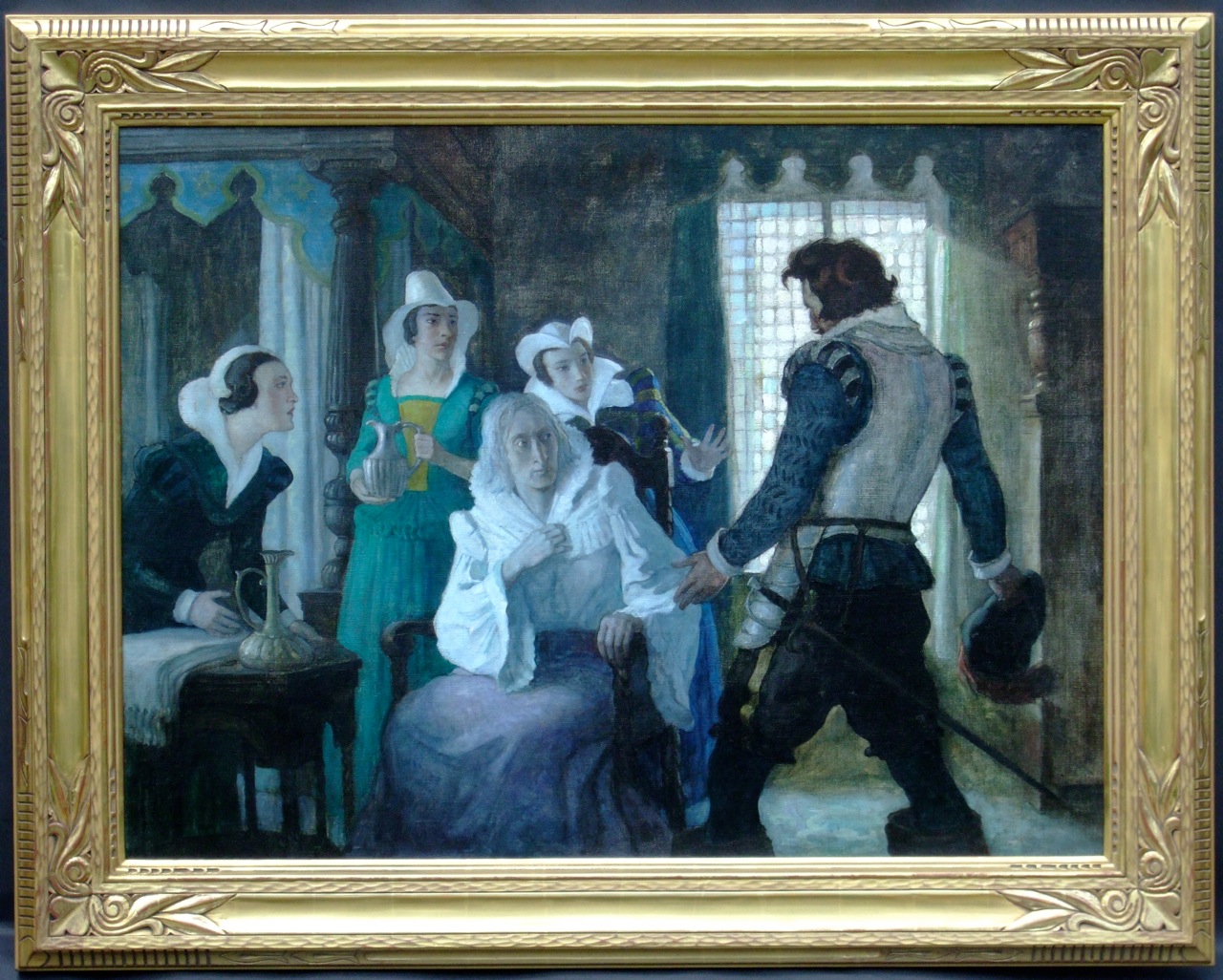 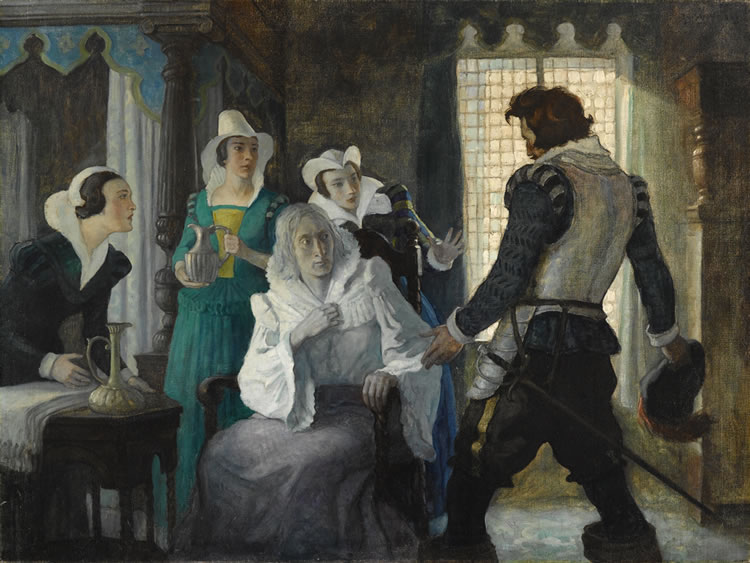 N. C. Wyeth, the patriarch of the legendary Wyeth family, is the most famous student of Howard Pyle. He was noted for his heroic, masculine figures and scenes, his wonderful sense of color and light, and outstanding composition. His early work emphasized western subjects that are extremely valuable, as are his historic illustrations for Treasure Island and The Deerslayer, among other classics. His works hang in many museums. Until 1930, all of his paintings were oil on canvas, after which he changed to oil on gesso board to achieve more vivid colors.

This large 1928 painting was a story illustration in Ladies Home Journal and shows a dramatic moment in the lives of Queen Elizabeth I and Robert Devereux, 2nd Earl of Essex, who played the courtier’s role of currying favor with the Queen through flattery and flirtation, despite being 34 years her junior. This scene shows Essex entering the Queen’s dressing chamber unannounced, with her thin grey hair exposed, before she put on one of her wigs or painted her face. She never forgave him. Ultimately, he was arrested and convicted of treason for leading a rebellion and attempting to seize control of the City of London. He was beheaded at the Tower of London on February 25,1601.

NEWELL CONVERS WYETH (AMERICAN 1882-1945) Title: "AND THERE, QUITE CLOSE TO HIM WAS ELIZABETH AMONG HER LADIES, IN A DRESSING GOWN, UNPAINTED, WITHOUT HER WIG, HER GREY HAIR HANGING IN WISPS ABOUT HER FACE, AND HER EYES STARTING FROM HER HEAD."

Provenance: Titus C. Geesey, Wilmington, Delaware, to 1964.From the Collection of The Wilmington Institute Library, Wilmington, Delaware.EXHIBITED:(possibly) The Wilmington Society of the Fine Arts annual exhibition 1929, catalogue number 15 as 'Elizabeth Queen of England'. (Records are unclear whether the painting exhibited is the present work or another image of Elizabeth from the same story).LITERATURE:Newell Convers Wyeth to James Boyd, Jan 5. 1928, Southern Historical Collection, Library of the University of North Carolina.Douglas Allen and Douglas Allen Jr., N.C. Wyeth, The Collected Paintings, Illustrations and Murals(New York: Crown Publishers, 1972), p. 263.Christine Podmaniczky, N.C. Wyeth, A Catalogue Raisonné of Paintings (London: Scala, 2008), I. 1079 (1822), p. 508.NOTE:This work was painted as a color illustration for 'Elizabeth and Essex' by Lytton Strachey, Ladies' Home Journal vol. XLV, no. 11 (Nov. 1928) p. 17.This painting is NCW number 1822 in the catalogue raisonné of the works of Newell Convers Wyeth by the Brandywine River Museum, Chadds Ford, Pennsylvania.