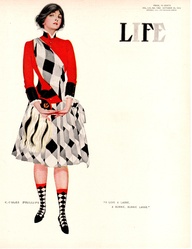 There are times I regret being a writer, or at least the sort of writer who doesn’t get James Patterson paydays. Had I had the good sense to be a venture capitalist, or even had I just run a bodega, I might be able to afford a mistress. And there is one young lady I’ve got my eye on. I’ll tell you about her in a moment.

It all started because I have a weakness for commercial art painted for magazine covers and advertisements from the first half of the 20th century. This may be sacrilege, but I’m not really a Norman Rockwell guy. One can’t help but admire his impeccable draftsmanship and his unerring sense of humor, but liking Rockwell is just a bit obvious. More interesting is the artist from whom a young Norman relentlessly copied and cribbed, J.C. Leyendecker.

Even if you’re not familiar with Leyendecker, you know his distinctive work. Just close your eyes and imagine the Platonic form of Jay Gatsby. The picture in your mind’s eye is almost certainly a Leyendecker. Gatsby’s beautiful shirts, piles of which made Daisy sob, would likely have had Arrow collars, the advertisements for which featured Leyendecker illustrations of impossibly handsome young men.

While Leyendecker perfected the improbable beauty of chiseled chins and jutting jaws, his good friend C. Coles Phillips created beautiful women, lovelies that, in a sort of magic trick, Phillips then made to disappear.

Phillips’ typical work, though painted in the teens and '20s, is startlingly modern. He would paint a woman in a dress the exact color as the background. The visual trick made the woman — often all but her face, hands, and feet — seem to vanish. They were called “fadeaway girls,” and Phillips worked and probably overworked the concept.

Trying to learn more about Phillips’ art, I searched every image of his I could find: fadeaway girls in blue, red, brown, olive green. And then I was brought up short by a girl that didn’t fade away in the least. For Life magazine in 1910, Phillips painted a young woman in a Scottish get-up. For all its simplicity, the work is remarkably complex. The pleated tartan skirt is almost cubist. Her diffident pose has echoes of Singer Sargent’s self-assured beauties. And beauty she is, with an expression not quite world-weary but certainly worldly, if wary. She seems both to be drawn to the viewer and aloof from him.

Captivated, I began what I was sure would be a vain search for the actual, original painting, called “Hoot, Mon!” Chances are if it wasn’t in a private collection, it would be out of sight in the basement storage of some overstuffed museum. But if I could locate it, I could at least be on the lookout for when it might be exhibited.

I found that the Scottish girl was just three hours away, and for sale, no less.

Soon I was driving up from D.C. to The Illustrated Gallery in Fort Washington, Pa., just to get a look at her in person. There I found walls covered with amazing rarities: an otherwise serene Maxfield Parrish forest scene that, in crepuscular purple and orange, thrummed and vibrated like a psychedelic Summer of Love concert poster; Leyendecker covers for the Saturday Evening Post, some worth half a million dollars.

And there was the Scottish girl. What with college tuitions to pay, I don’t seem to have an extra $55,000 to make her my own. But I did get a few stolen moments with her, pulling up a chair and taking in the restrained passion of her gaze.

Alas, sooner or later someone is going to realize that “Hoot, Mon!” is on the market. It will get snapped up, and my Scottish girl will be the kept woman of some private collector for the next 20 or 30 years, which is to say I may never see her again. Which will make her the ultimate "fadeaway girl” for me.