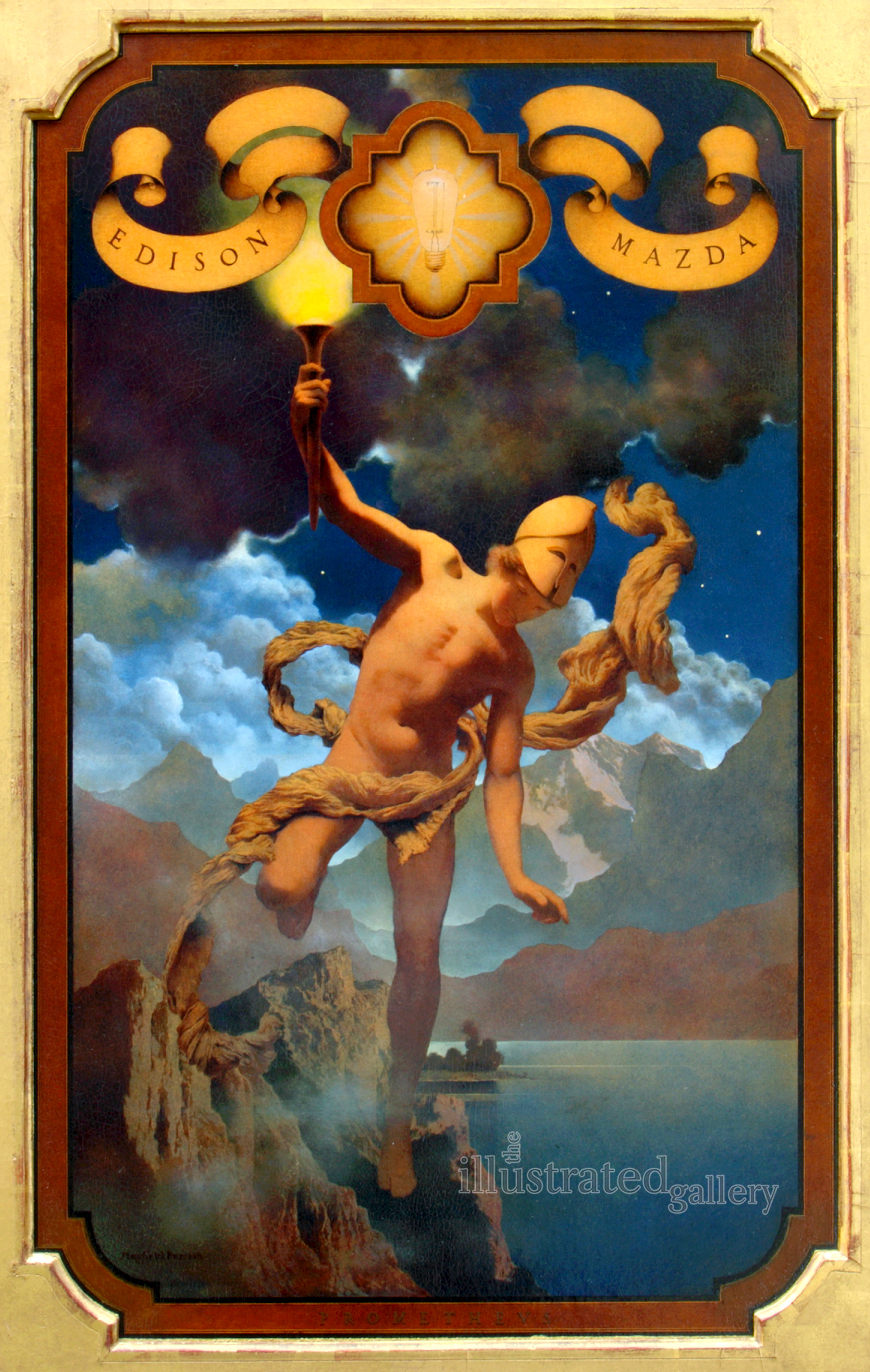 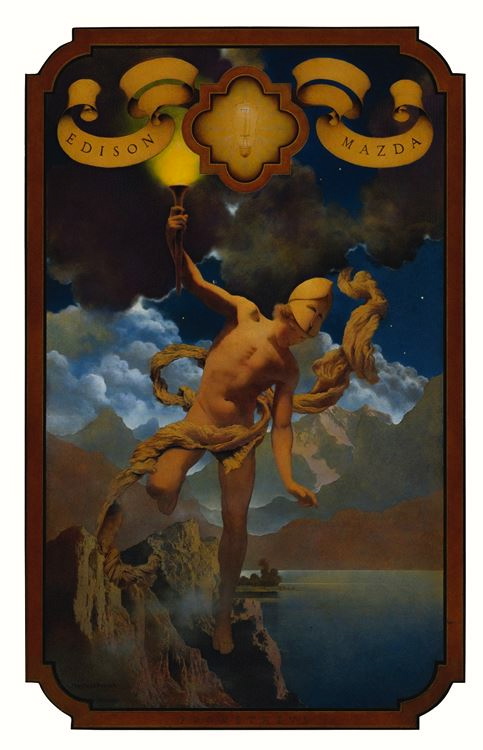 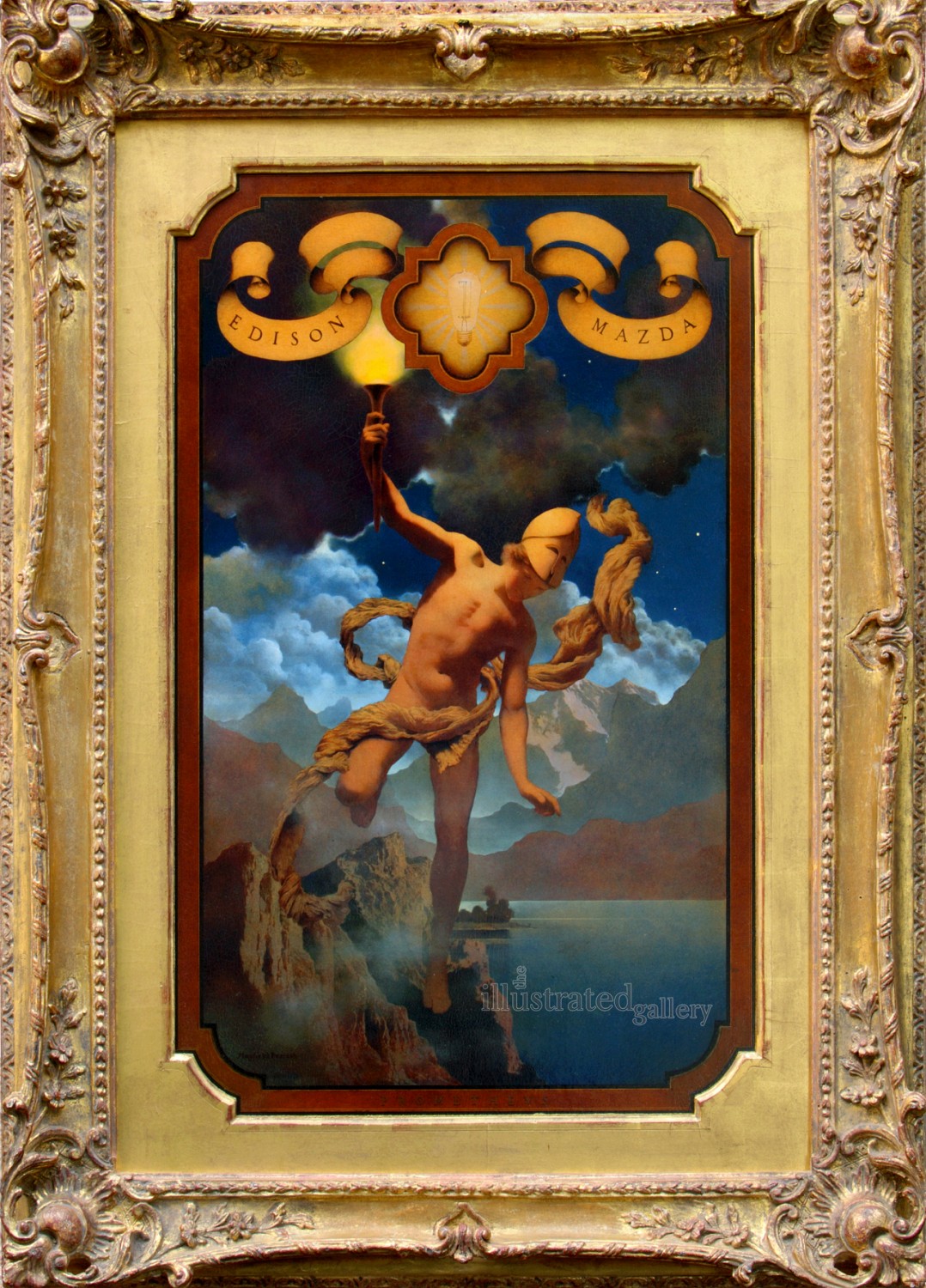 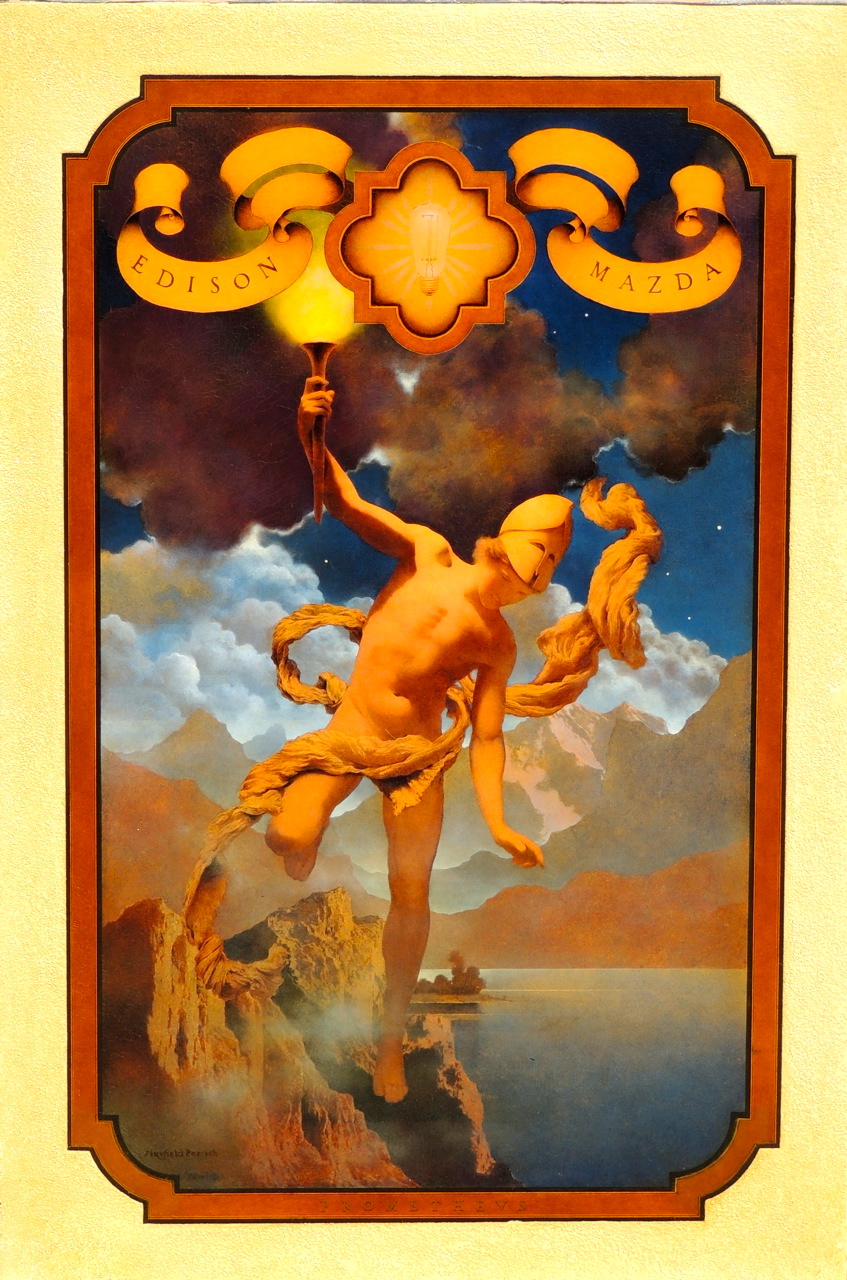 Maxfield Parrish began his career at age 25 as an illustrator, painting magazine covers, advertisements, posters and book illustrations. He was already a well-respected commercial artist when, in 1917, he received a commission from General Electric to produce annual calendar illustrations to advertise the company’s Electric-Edison Mazda Lamps. Eager to sell their product as new and innovative, GE executives asked the artist to emphasize the many facets of light: natural, manmade and fantastical. Over the course of the next 15 years, Parrish created a group of 17 paintings illustrating the progression of the history of light, the immense popularity of which transformed the artist into a national icon. Between 1917 and 1931, over 20 million copies of the calendar were painstakingly reproduced in two different sizes and four different colors. Parrish enjoyed painting images for calendars, because he loved the immediacy and ubiquity of these commissions: far more people would gain exposure to his work in the offices, banks and stores where the calendars commonly hung. If the artist was not already well-known in popular culture through his illustrations and other ads, Parrish became a household name through the Mazda commission.

Prometheus, painted in 1919 and published the following year, visually translates a mythical tale of Prometheus, the Titan who stole fire from the Olympian gods and presented it to early man, thus allowing for the evolution of civilization and cultural progress. As a result of this act, Prometheus became the patron of all earthly artists and thinkers as he brought enlightenment to the world. Parrish emphasizes this heroic interpretation in the present work by depicting the subject in clear mythological glory. Bathed in a warm golden light, Prometheus is rendered in the classical Greek style, idealized and youthful, returning triumphantly to earth bearing the flame of the gods. Although the scene’s iconography is predominantly appropriated ancient Greek sources, Prometheus characteristically incorporates such diverse influences as Old Master principles, Pre-Raphaelite aesthetics, and Parrish’s own vivid imagination to achieve a fantastical scene that both appealed to popular imagination and was perfectly suited to the corporate image GE wanted to project.    The preternatural landscape rendered behind the figure was likely conjured by Parrish’s fertile imagination; he created these make-believe “Parrishscapes” by synthesizing both real and imagined natural elements. Behind the protagonist, a distant view reveals a mysterious mountainous landscape. The artist’s dazzling gifts as a colorist reveal themselves as the dramatic moonlight beams down upon the crystal calm lake and the craggy outcroppings that surround it. The velvety, midnight blue was reportedly inspired by the effects of light filtering through the cloud layer that Parrish felt was specific to New England: “There is an intense blue in New England,” he once wrote. “Put a mountain here, against the east, in a clear sunset glow, and it would be more startling than in Arizona” (quoted in Alma Gilbert, The Masterworks, Berkeley, California, 1992, p. 103). The present work exhibits a remarkable luminosity and purity of colors that Parrish attained by painting with layers of transparent colored glazes, now considered a hallmark of his distinctive style. Displaying lush color effects and an extraordinary attention to detail, Prometheus impressively demonstrates the unique style and vivid imagination that has earned Parrish his place among the most celebrated and beloved of American illustrators.