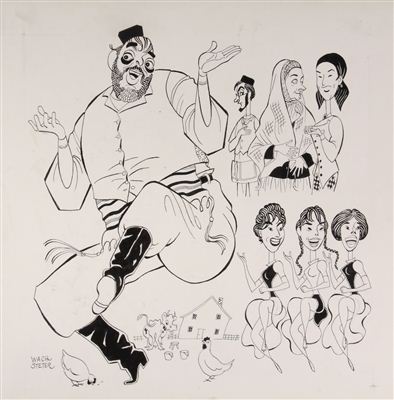 Caricature by George Wachsteter (1911-2004) for the opening of Zero Mostel in Hal Prince`s production of `Fiddler on the Roof` at the Imperial Theatre, Tues, Sept 22, 1964 for publication the same day in the Drama Section of the New York Journal-American. With (from l to r, top) Mostel as Tevye the Dairyman; Austin Pendleton as Motel the Tailor; Maria Karnilova as Tevye`s wife, Golde; and Bea Arthur as Yente the Matchmaker. Below are Tevye`s three daughters, (l to r): Joanna Merlin as Tzeitel, Tanya Everett (her B`way debut) as Chava, and Julia Migenes as Hodel. Produced by Harold Prince, directed by Jerome Robinson, designed by Boris Aronson and Patricia Zipprodt. Ran for 3,242 performances at the Imperial, Majestic and Broadway Theatres.