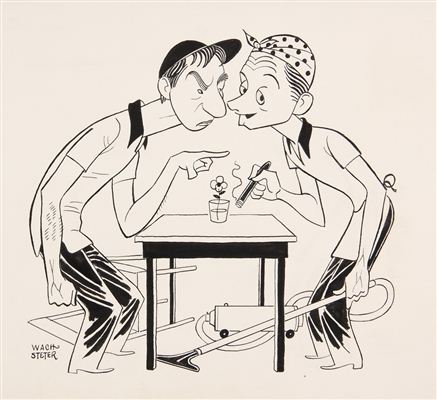 Caricature by George Wachsteter (1911-2004) of Walter Mathau and Art Carney in the original Broadway production of `The Odd Couple` by Neil Simon. The hit show, which was adapted into the hilarious film and TV series, was directed by Mike Nichols, designed by Oliver Smith, Jean Rosenthal & Ann Roth, and ran from 3/8/65 - 7/2/67, for 964 performances at the Plymouth & Eugene O`Neill Theatres.

The piece is on 10.00" x 15.00" illustration board, with an image that measures to 8.50" x 9.00." The illustration was used for Young & Rubicam, used in various promotional publications. Includes negative photostat. Minor soiling.