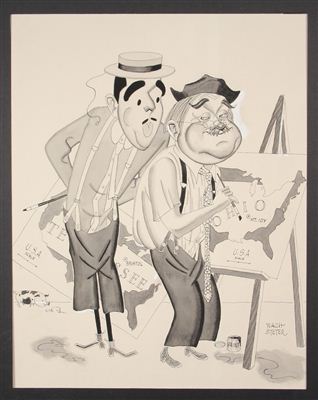 Caricature by George Wachsteter (1911-2004) of Tennessee Ernie Ford and Uncle Charlie Weaver (Cliff Arquette), probably for Sept 30, 1959 premiere of ABC`s `The Hobby Lobby`, where Weaver would interview guest celebrities about their hobbies. Comedy and variety sketches were later added to the show and the title changed to `The Charley Weaver Show`, yet the show was cancelled March 23, 1960. Artwork depicts Ford and Weaver next to maps highlighting their famous imaginary home towns.

This piece is on 15.00" x 22.00" illustration board with an image that measures to 13.00" x 16.00." Pasted on black paper mat, for unknown publication, but probably for TV column. Fine condition, white corrections by GW.