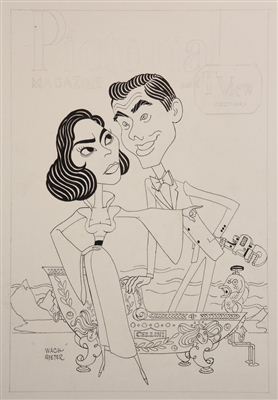 Caricature by George Wachsteter (1911-2004) of Johnny Carson & Marisa Pavin from `The Girl in the Gold Bathtub`, for the May 1, 1960 Journal-American TView cover. This artwork was a promotion for this comedy presentation on the CBS anthology series, `The United States Steel Hour`, broadcast live from NYC on Wednesday, May 4, 1960. Carson`s appearance herre was at a time when he emceed ABC`s `Who Do You Trust?` and about 2 1/2 years prior to his debut as the new host of `The Tonight Show`. Name `Cellini` embossed on the tub refers to the famed 16th-c Italian goldsmith and artist.