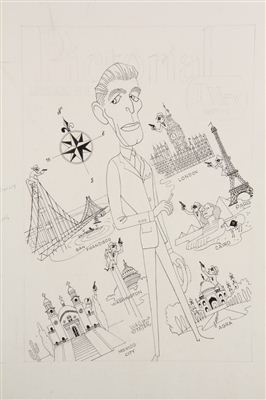 Caricature by George Wachsteter (1911-2004) of Michael Rennie as Harry Lime in the syndicated series `The Third Man`, loosely based on the character created by Graham Greene and played by Orson Welles in the classic 1948 film. On TV, Lime was an international business tycoon and private investigator. Series was a joint British-US venture first shown on American TV in 1959 with first-run episodes filmed until 1962 and repeated until 1965. Artwork for Sun July 23, 1961 cover of The New York Journal American TView Section to promote the NBC series.

This piece is on 14.75" x 22.00" illustration board, with an image that measures to 9.50" x 14.00." The second board has a photostat paste-up with watercolor overlay. Includes original magazine cover. Minor soiling.