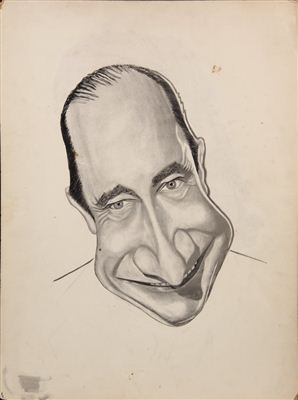 Caricature by George Wachsteter (1911-2004) of 1930s English character actor Eric Blore, best known for his film roles in `Top Hat`, `Shall We Dance` & `Swing Time`. In fact, he appeared in more Astaire-Rogers musicals than any other actor and always as an English butler or waiter. Blore also had a lengthy Broadway career, including an appearance in Cole Porter`s 1932-33 hit musical, `The Gay Divorcee`, opposite Fred Astaire; he reprised the role for the 1934 Astaire-Rogers film. Rendered in charcoal reduction (erasure from a black field). On 20" x 15" illustration board. 13" x 9" image. Minor soiling.