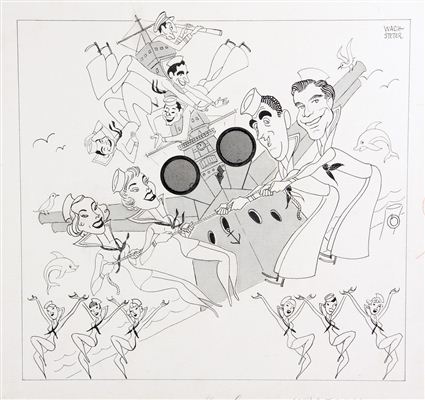 Caricature by George Wachsteter (1911-2004) for `Hit the Deck` with Jane Kean, Betty Ann Grove, Gene Nelson & Jules Munshin, at the Jones Beach Marine Theatre. (Jane Kean was TV`s Trixie Norton on `The Honeymooners` starting in 1966.) Appeared in the New York Journal American, Sunday, June 12, 1960, to promote the June 23rd opening of the Guy Lombardo production. Guy is depicted in the crow`s nest, and plays himself in the tune-filled nautical comedy, which was a revival-revamp of the 1927-28 Broadway musical of the same name.