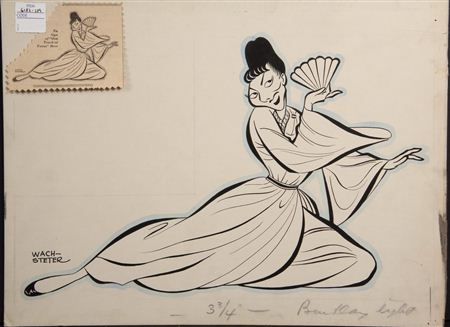 Caricature by George Wachsteter (1911-2004), of Mary Martin in the Broadway production of `Lute Song` at the Plymouth Theatre, Feb-June 1946, co-starring a then unknown Yul Brenner as Tsai-Yong. Promoted as a "Love Story with Music" based on the famous Chinese play "Pi-Pa-Ki" by Kao-Tong-Kia and Mao-Tseo, with book written by Sidney Howard and Will Erwin, music by Raymond Scott and lyrics by Bernard Hanighen. Because of Brynner`s impressive and dynamic turn in `Lute Song`, it was Martin who recommended him to Rogers & Hammerstein, who cast him as the lead in `The King and I`. On illustration board, for the New York Journal-American. 11" x 15". Notations at bottom, light soiling.