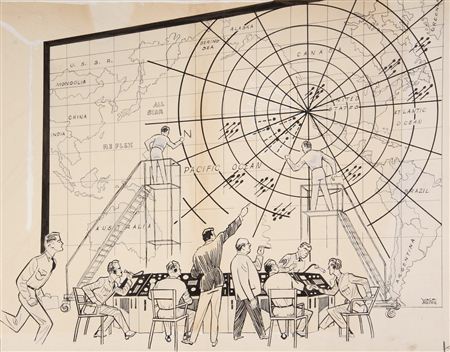 Drawing by George Wachsteter (1911-2004) for the 1962 release of the book `Fail-Safe`, depicting the Strategic Air Command War Room in Omaha, Nebraska. This chilling Cold War nightmare, by Eugene Burdick and Harvey Wheeler, was adapted to the screen in 1964 by Walter Bernstein (one of the blacklisted `Hollywood Ten` writers) and directed by Sidney Lumet. This artwork was to accompany the review in the New York Journal-American. On 14 1/2" x 22" illustration board. Includes original clipping. 13" x 16 3/4" image. Unevenly toned, minor soiling, editor`s notations.