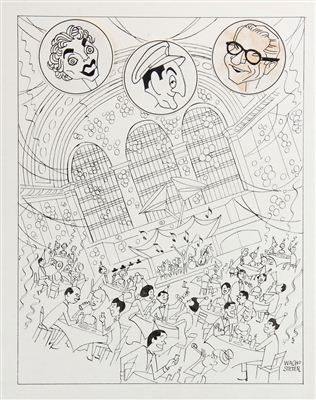 Caricature by George Wachsteter (1911-2004) for the Dec 31, 1963 CBS-TV live telecast of `New Year`s Eve with Guy Lombardo`, in the Main Concourse of Grand Central Station, a departure from his usual venue at the Waldorf-Astoria. The program began at 11:15 p.m. EST and lasted until 12:15 a.m. the next day. Ringing in the New Year with Guy and his Royal Canadians are Allen Ludden & Dorothy Collins. Proceeds from the paying celebrants were donated to the National Association for Mental Illness. Artwork used in several New York City newspapers.