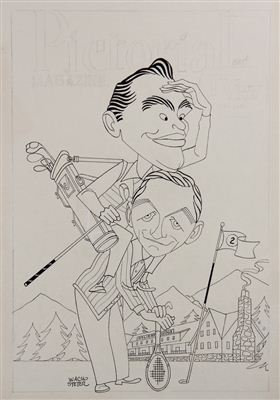 Caricature by George Wachsteter (1911-2004) of Canadian comedy duo Johnny Wayne & Frank Shuster for their new CBS-TV series `Holiday Lodge`. The act was well known to US viewers from many variety shows of the day, the show was a summer replacement for `The Jack Benny Program`, and ran Sundays from June 25 to Oct 8, 1961 for only 13 episodes. Wayne & Shuster played as Johnny Miller and Frank Boone, entertainment directors for a posh country lodge. Art used for the cover of the July 9, 1961 New York Journal American Pictorial Magazine and TView Magazine, includes original copies of the cover.