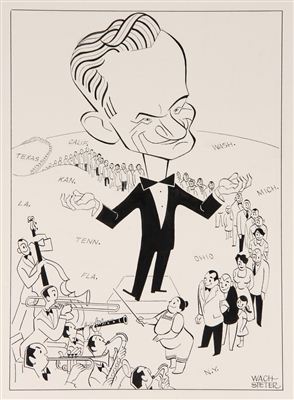 Caricature by George Wachsteter (1911-2004) of `Swing-and-Sway` orchestra leader Sammy Kaye for his CBS-TV audience participation variety show, `So You Want to Lead a Band`, which ran June-July 1950. The `Swing-and-Sway` conductor invited 6 members of the studio audience to try their hand at leading a band. Kaye would hand his baton to each of them and his band would exactly play the direction the neophyte`s baton indicated, often with hilarious results. The best bandleader was chosen by audience applause & awarded a prize. The series resurfaced 4 years later on ABC-TV & aired Aug 1954-Jan 1955. For the New York Journal-American.