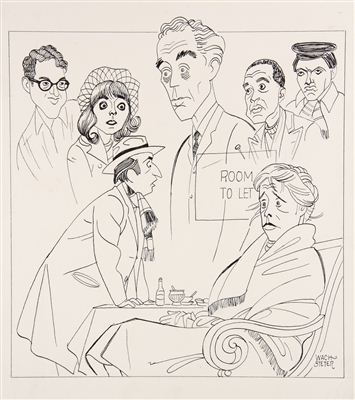 Caricature by George Wachsteter (1911-2004) of the combined cast of the 1964-65 Off-Broadway double-billed productions of Pinter`s `The Room` & `A Slight Ache`, under the umbrella of `The New Pinter Plays`. Directed by Word Baker, both one-acts starred Frances Sternhagen who played opposite Henderson Forsythe in `Ache` and Clarence Felder in `Room`. Ran at the Writers Stage Theatre, NYC, from 12/9/64 to 10/3/65 for 342 performances. Sternhagen won the Distinguisehd Performance Obie for this show. Probably for the New York Journal-American.