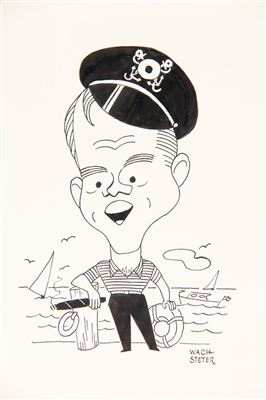 Caricature by George Wachsteter (1911-2004) of Mickey Rooney to promote his first television series on the NBC-TV sitcom, `Hey, Mulligan!`, aka `The Mickey Rooney Show`, which debuted Aug 28, 1954. Rooney played a television studio page at the International Broadcasting Company, where he hoped one day to make it in Hollywood. Viewer tune-in was mediocre, as it was slotted opposite `The Jackie Gleason Show` on CBS, and despite NBC`s faith in Rooney, the show left the air June 4, 1955. Of note is the fact that the series was co-created by Blake Edwards, his first effort for television. On 15" x 10" illustration board, probably for the New York Herald Tribune. 7" x 5" image. Edge toned.