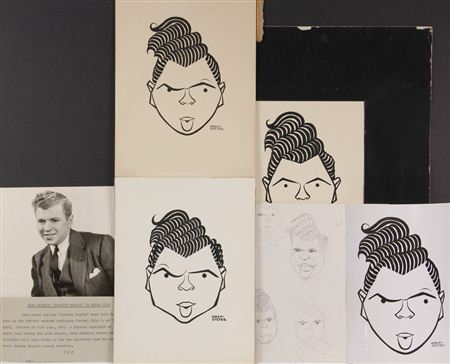 Caricature by George Wachsteter (1911-2004), of Broadway Actor, Director & Producer Ezra Stone, more famous to audiences as the voice of anxiety-ridden adolescent Henry Aldrich in the popular NBC & CBS radio sitcom, `The Aldrich Family` (1939-1953) which was known for the Henry`s cracked voice that Stone created as well as the catchphrase, `Coming, Mother!`. Aldrich played the role from 1939-42 before leaving to fight in WWII. After the war, Stone returned to the show in Nov 1945, which is the time of this drawing. In later years, Stone became one of TV`s busiest directors up until the 1980s. Includes (3) ink versions, photo & sketches. 9" x 6" image. Minor soiling.