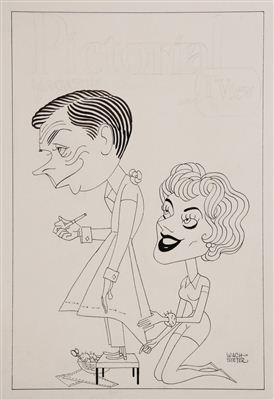 Ink on Illustration Board drawing with color overlay, this illustration features Tom Ewell as Tom Potter and Marilyn Erskine as his wife Fran Potter to promote the sitcom, The Tom Ewell Show.

The Tom Ewell Show debuted September 23, 1960 on CBS-TV and left the air on May 23, 1961. This Illustration by George Wachsteter was used as the cover of the New York Journal-American Pictorial Magazine and TView Section on Sunday, Sept. 25, 1960.