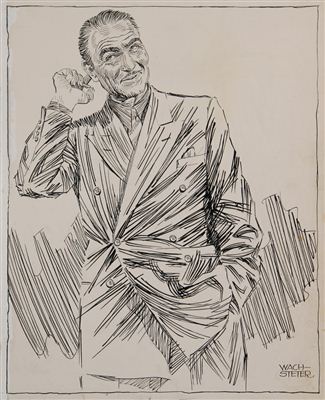 Drawing by George Wachsteter (1911-2004) of Henry Wilcoxon as the Prosecutor in 1948 production of `The Vigil` at the Royale Theatre. Directed by Alexander Markey, designed by Nicholas Yellenti, the show ran May 21-29, 1948. Though a flop, the play is notable for featuring rising star Walter J. (Jack) Palance, who at the time was understudy to Brando during the run of `A Streetcar Named Desire`, before replacing Brando as Stanley Kowalski by 1949.