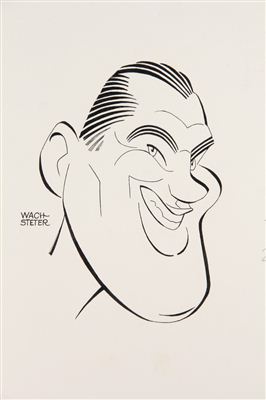 Caricature by George Wachsteter (1911-2004) of Baseball Legend and Sportcaster, Jay Hanna `Dizzy` Dean, probably done ca. 1950-52 when the colorful former pitcher for the St. Louis Cardinals began to do radio/TV play-by-play announcing for the New York Yankees (which only lasted 1950-51); could also have been rendered when Dean began calling plays over the Mutual Broadcasting System in 1952. Throughout his sports brioadcasting career, Dean was an engaing longtime spokesman for Falstaff Beer.