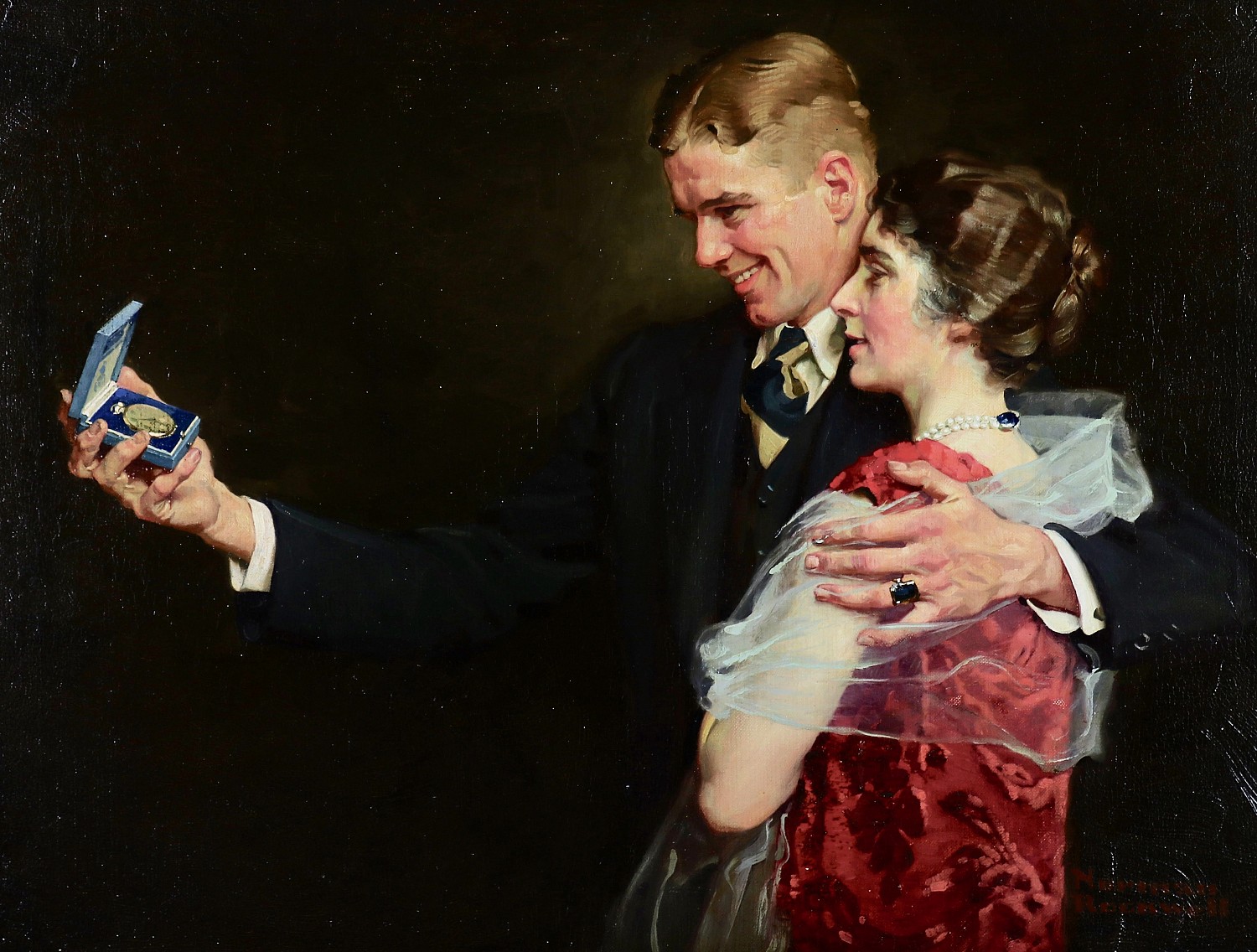 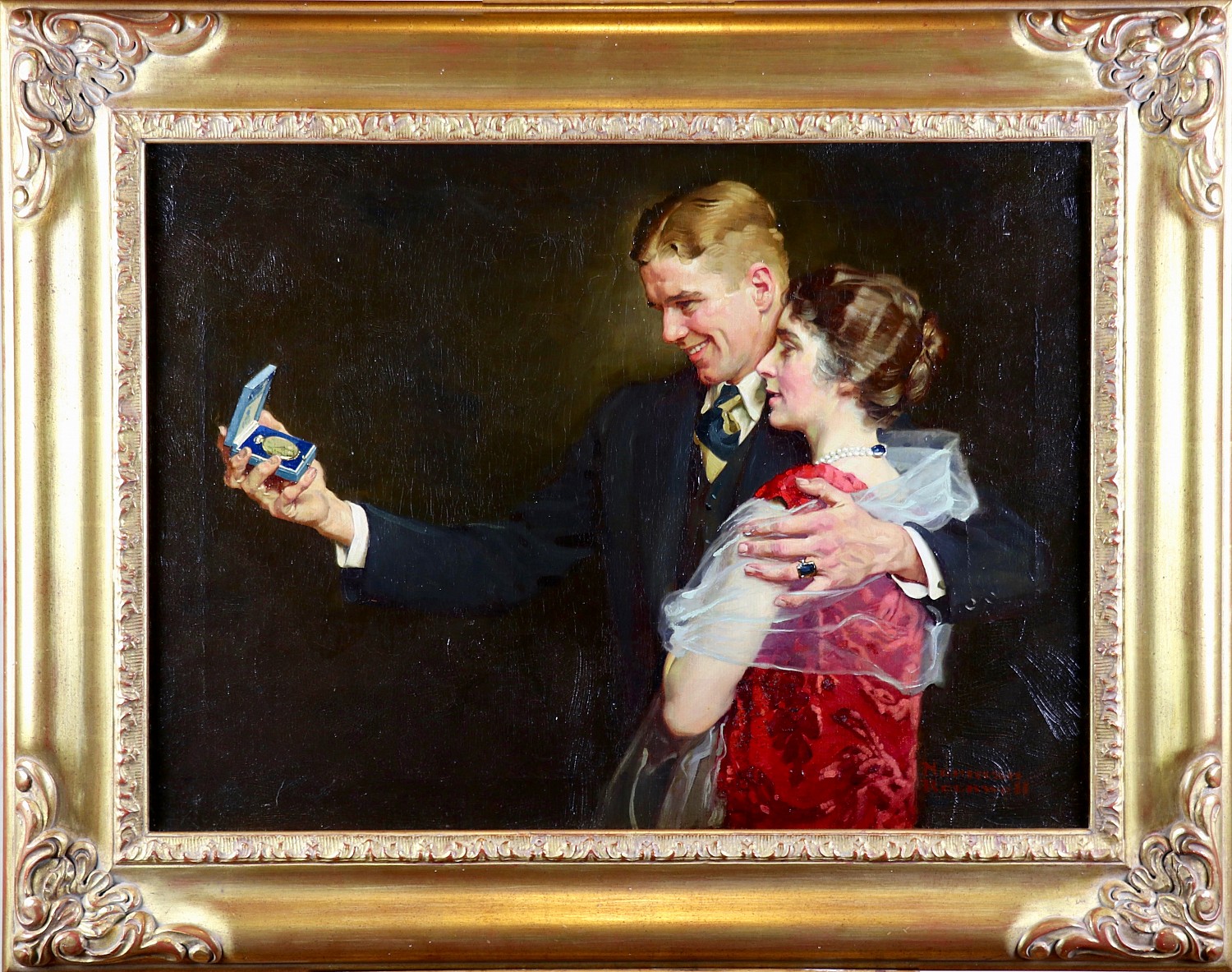 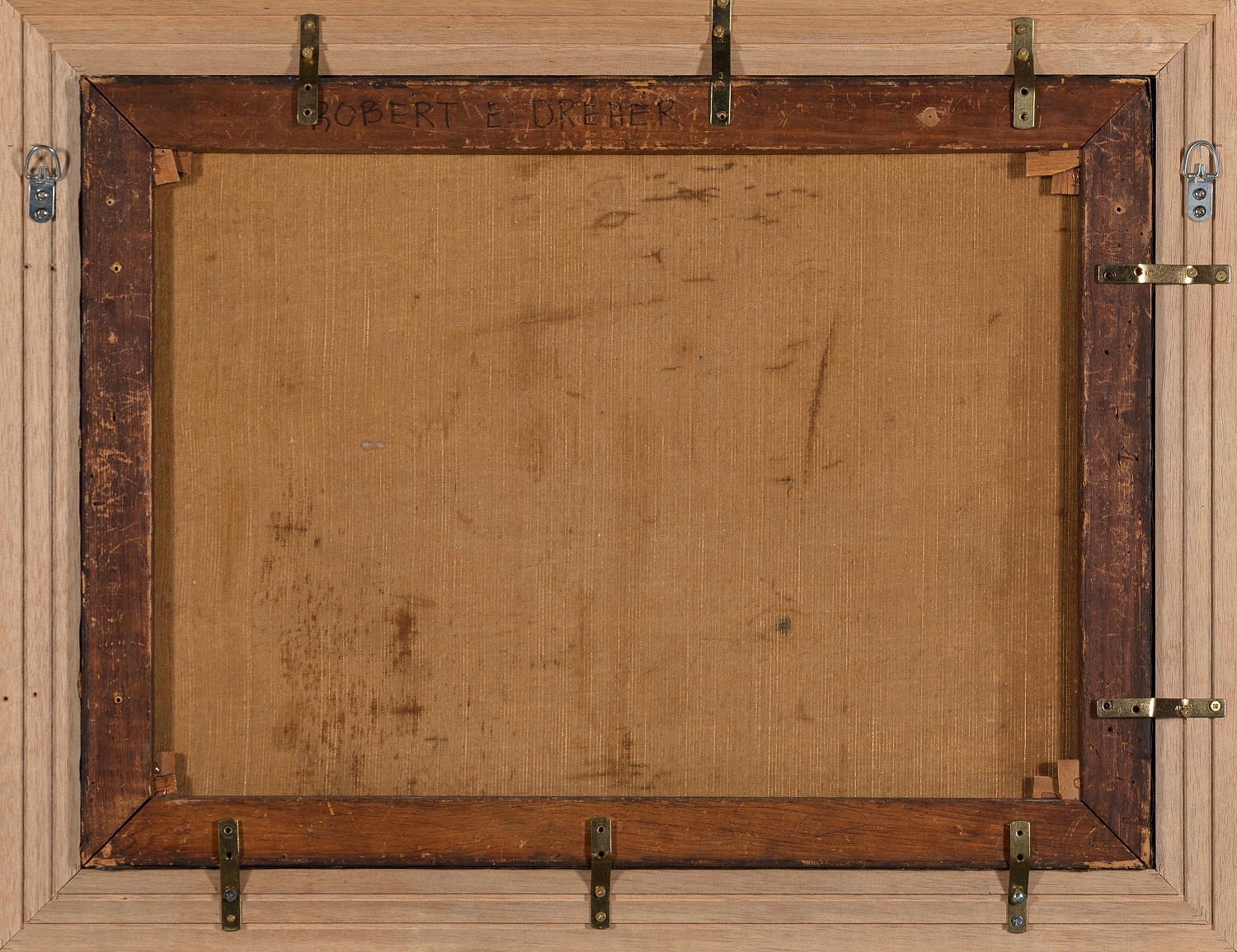 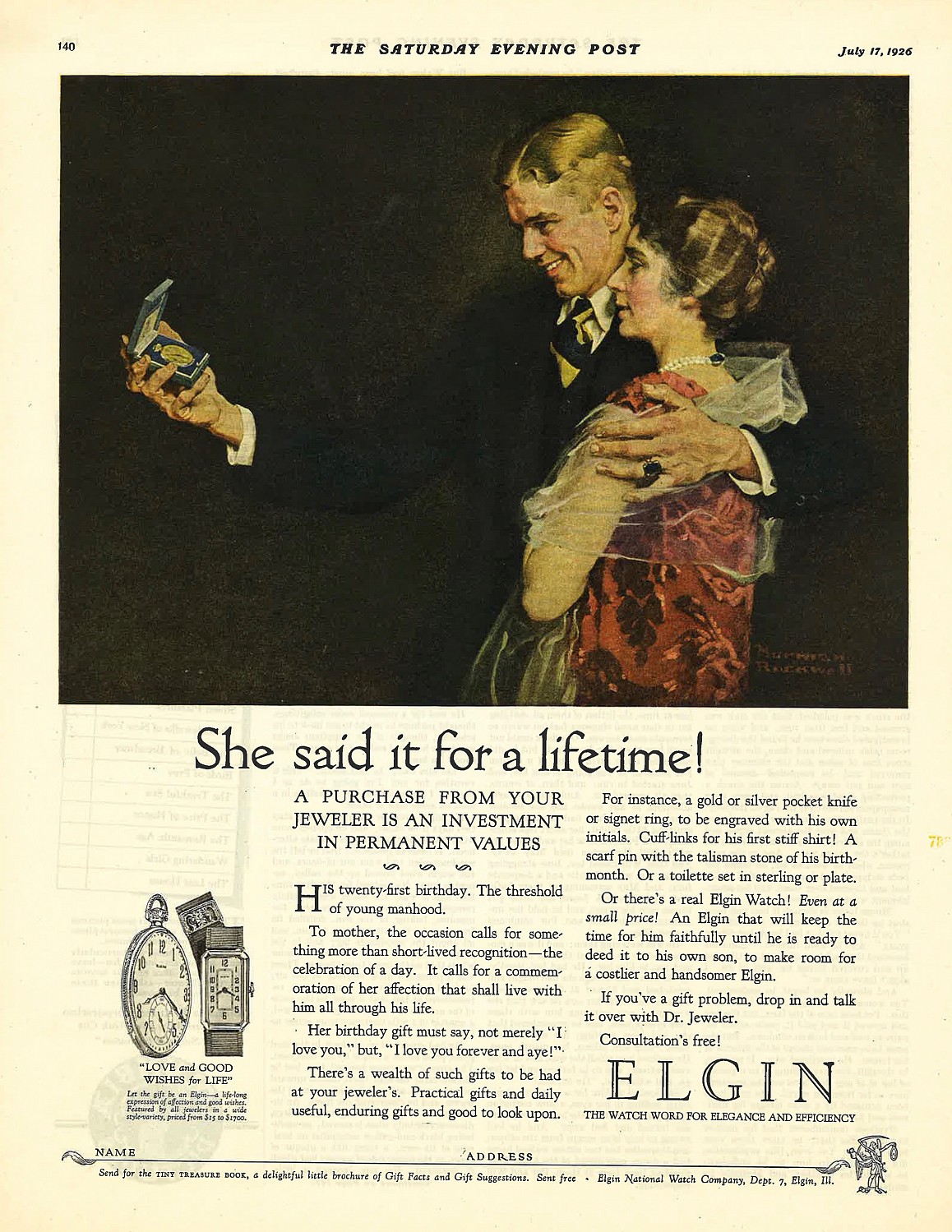 Through numerous illustrations appearing in publications such as The Saturday Evening Post, The Literary Digest, andLadies Home Journal, Norman Rockwell's timeless images of everyday America entered the homes of millions of people. His descriptive painting style and ability to encapsulate the traditional and nearly universal values shared in the American experience contributed to his tremendous popularity and rendered him hugely successful. She Said it for a Lifetime (Man Receiving Gift Watch) serves as a primary example of Rockwell's skillful ability to present an enduring and heartwarming image that continues to resonate with the public even decades after its creation.

During the late 1910s, illustration jobs were becoming increasingly competitive as magazines were incorporating more photographic images into their layout and rising costs in book publishing were limiting opportunities for illustrators in that field. It is probably due only to his talent and drive that Rockwell was largely unaffected by this trend. "At an age when most young men are leaving college, Norman already ranked as one of America's leading illustrators" (A.L. Guptill, Norman Rockwell: Illustrator, New York, 1946, p. 72).

In 1916, one of Rockwell's illustrations appeared on the cover of The Saturday Evening Post for the first time. This great achievement was a windfall for the artist leading to commissions from a variety of magazines, including Collier's, The Literary Digest, Ladies Home Journal, and Life.

Recognizing the readership's nostalgia for young and old alike, Rockwell produced She Said it for a Lifetime (Man Receiving Gift Watch) as an advertisement for Elgin Watch Company that first appeared in the June 1926 Ladies Home Journal, followed by an appearance in The Saturday Evening Post Magazine on July 17, 1926, page 140. The present work is an endearing portrayal of a mother bestowing an Elgin pocketwatch upon her son on his eminent twenty-first birthday. As the advertisement eloquently states:

"His twenty-first birthday. The threshold of young manhood.
"To mother, the occasion calls for something more than short-lived recognition-the celebration of a day. It calls for a commemoration of her affection that shall live with him throughout his life.
"Her birthday gift must say, not merely 'I love you,' but, 'I love you forever and aye!'"

It is of little wonder that Elgin Watch Company would have commissioned Norman Rockwell for doing such a work. Elgin Watch Co., which started to produce their first pocketwatch movements in 1867, was during the 1920s the most dominant of the American watch brands, producing up to one million timekeepers in 1926 alone. Norman Rockwell, whose finger rested firmly on the pulse of American ideals of the period, perfectly captures the emotion of giving and receiving of an Elgin Timepiece with a catch line in the advertorial: "An Elgin that will keep the time for him faithfully until he is ready to deed it to his own son". This advanced style of advertising, and the gifting imagery portrayed in Rockwell's painting, is still current and successful for the top luxury timepiece brands today, most notably Patek Philippe's "you merely hold onto it for the next generation" campaign.

With She Said it for a Lifetime (Man Receiving Gift Watch), Elgin Watch Co. taps into the strong, and one might even say progressive, purchasing power of women in 1926. This notion of marketing directly to women is what one might expect to see in the 1950s or later. Yet in 1926, the concept speaks volumes about the forward thinking minds of both Elgin, and of Rockwell himself.

She Said it for a Lifetime (Man Receiving Gift Watch) is executed in Rockwell's signature descriptive style of finely drawn, clear realism with a wealth of fascinating detail-the young man's ring and well-cut suit, his mother's diaphanous shawl, and the Elgin watch itself. In discussing his career, Rockwell commented, "I was showing the America I knew and observed to others who might not have noticed. And perhaps, therefore, this is one function of the illustrator. He can show what has become so familiar that it is no longer noticed. The illustrator thus becomes a chronicler of his time" (as quoted in Norman Rockwell: A Definitive Catalogue, Stockbridge, Massachusetts, 1986, p. xii).

With She Said it for a Lifetime (Man Receiving Gift Watch), Rockwell once again succeeds in capturing the nostalgia of a simpler world that is as familiar today as it was nearly a century ago when he painted this beguiling work.

The painting was inherited directly from the Estate of Robert E. Dreher and is offered from the Collection of Bradley and Susan Schuchat, his descendants. The proceeds are being generously donated to fund college scholarships, one of which is a graduate nursing scholarship at the University of South Florida. The scholarship funds nurses furthering their education in the Masters, Doctoral of Nursing and Ph.D. programs and was established in memory of their daughter, Diane.