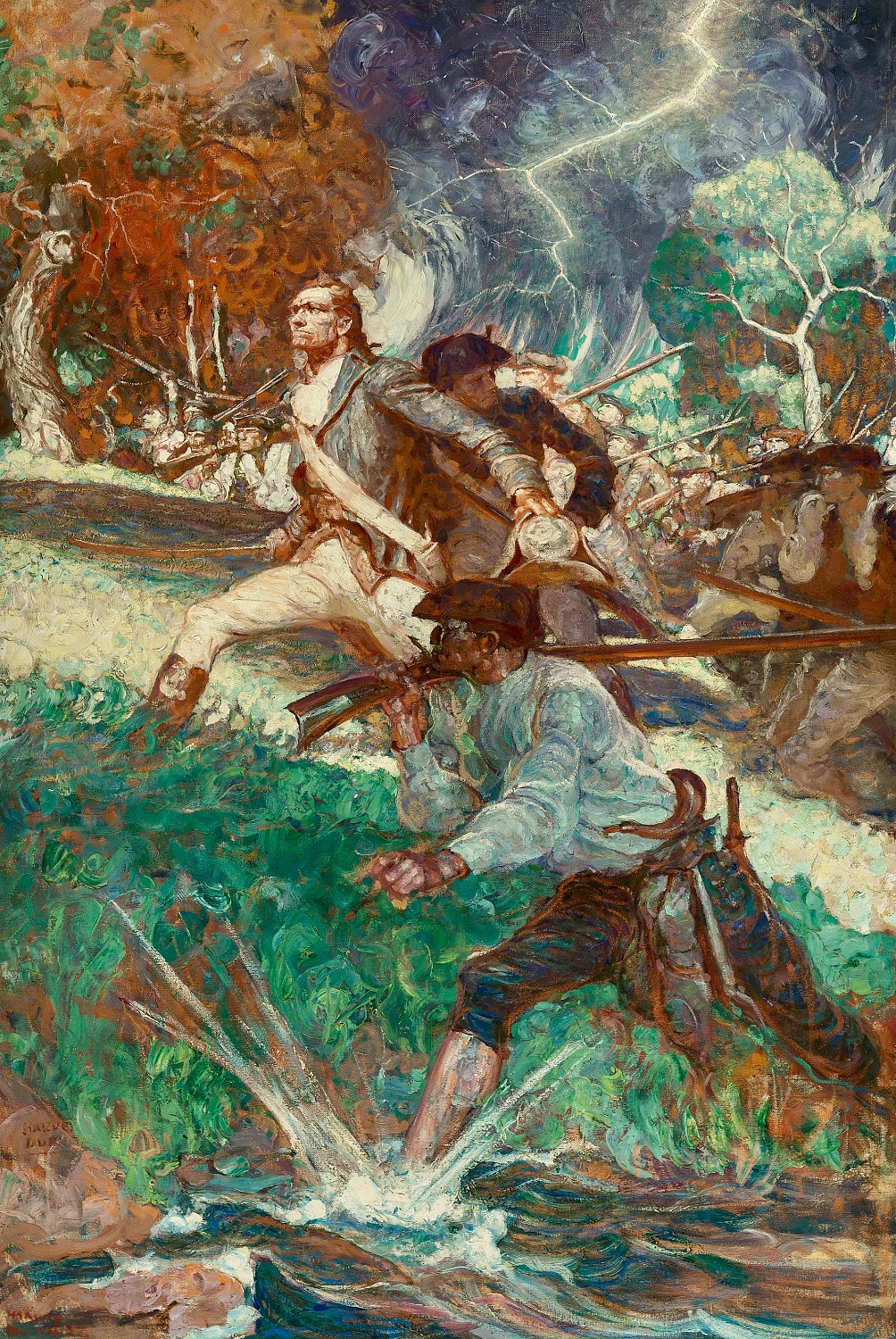 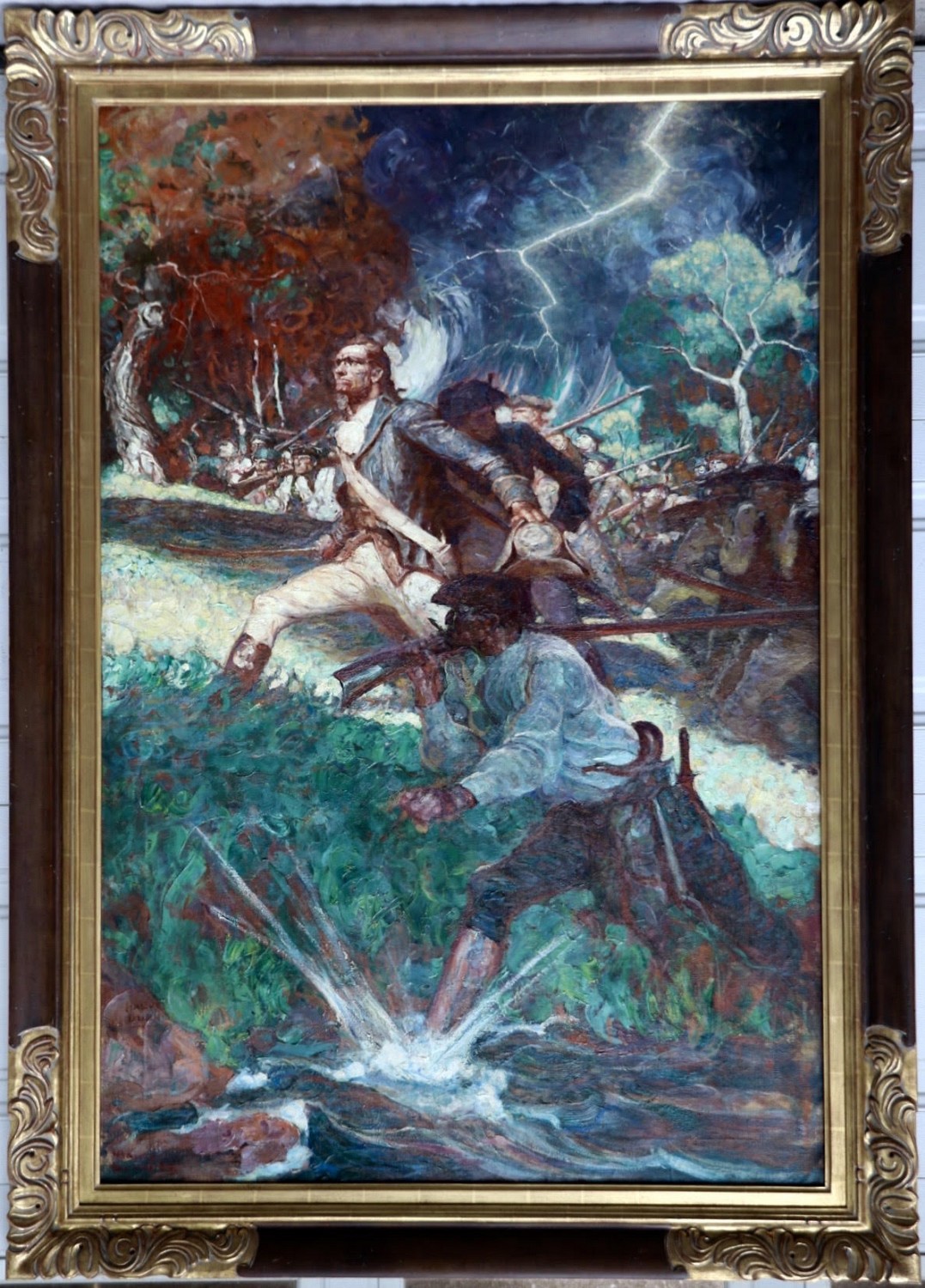 Harvey Dunn's Dawn, Dawn, Dawn is a truly exceptional illustration that captures a key moment of American History. In the present work, Dunn skillfully depicts colonial soldiers moving stealthily under the cover of night, rushing towards victory at Fort Ticonderoga with a surprise attack at dawn. The splashing water of the creek and the lengthening of strides of the soldiers perfectly encapsulates the rushed sense that this is the singular moment- lightning striking only once - for the Colonials to prevent defeat.

The Battle of Ticonderoga was the first battle in the American Revolution that the ragged and varied Colonials won. It was a decisive victory carried out by Ethan Allen and Benedict Arnold. Built at a narrows near the south end of Lake Champlain in northern New York State, Fort Ticonderoga's key location was the barrier of the North and West portions of the United States. By taking the fort, the Colonials would effectively prevent the British from flanking their forces and coming up behind General Washington's army. Additionally, the Colonials utilized over fifty cannons and military supplies taken from the fort to relieve the siege of Boston and therefore, this attack would lead to a key second win for the revolutionaries. The importance of these first few victories was vital to continued American defiance and morale - this particular triumph would demonstrate that despite going against the best military in the world, the Americans could in fact win.

To illustrate this moment, Dixon Ticonderoga hired Dunn, a prominent office and art supplies maker. They could not have chosen a better artist for this action filled scene. Dunn trained under Howard Pyle at his Brandywine School. Similar to his mentor, Dunn is meticulous in composition and draftsmanship, as seen in Dawn, Dawn, Dawn. The arch created by the tree at far left, juxtaposed against the wave of coming rain and lightning, highlights the central fighter, while a swooping diagonal line against his feet creates interest as well as a feeling of an unsteady and rushed movement. However, where Pyle and Dunn vary is their approach to the canvas. According to a fellow artist, "He [Dunn] literally attacked a canvas and sometimes I thought he would impale the painting with his brush" (A.R. Mitchell, Harvey Thomas Dunn 1884-1952, Trinidad, Colorado, 2018, n.p.). Dunn's visceral approach to painting is clearly seen in his quick and confident brushwork. The thick impasto, anchored by rich brown tones, leads the eye of the viewer once again towards the central figure. These swirling touches lend the painting an almost regionalist feel, but more importantly they create a sense of immediacy-The viewer naturally feels the tunnel vision of adrenaline with details fading away by the edges.

Never before seen on the open market, Dawn, Dawn, Dawn is truly a masterpiece of illustration of the Golden Age in style, subject, and scale.