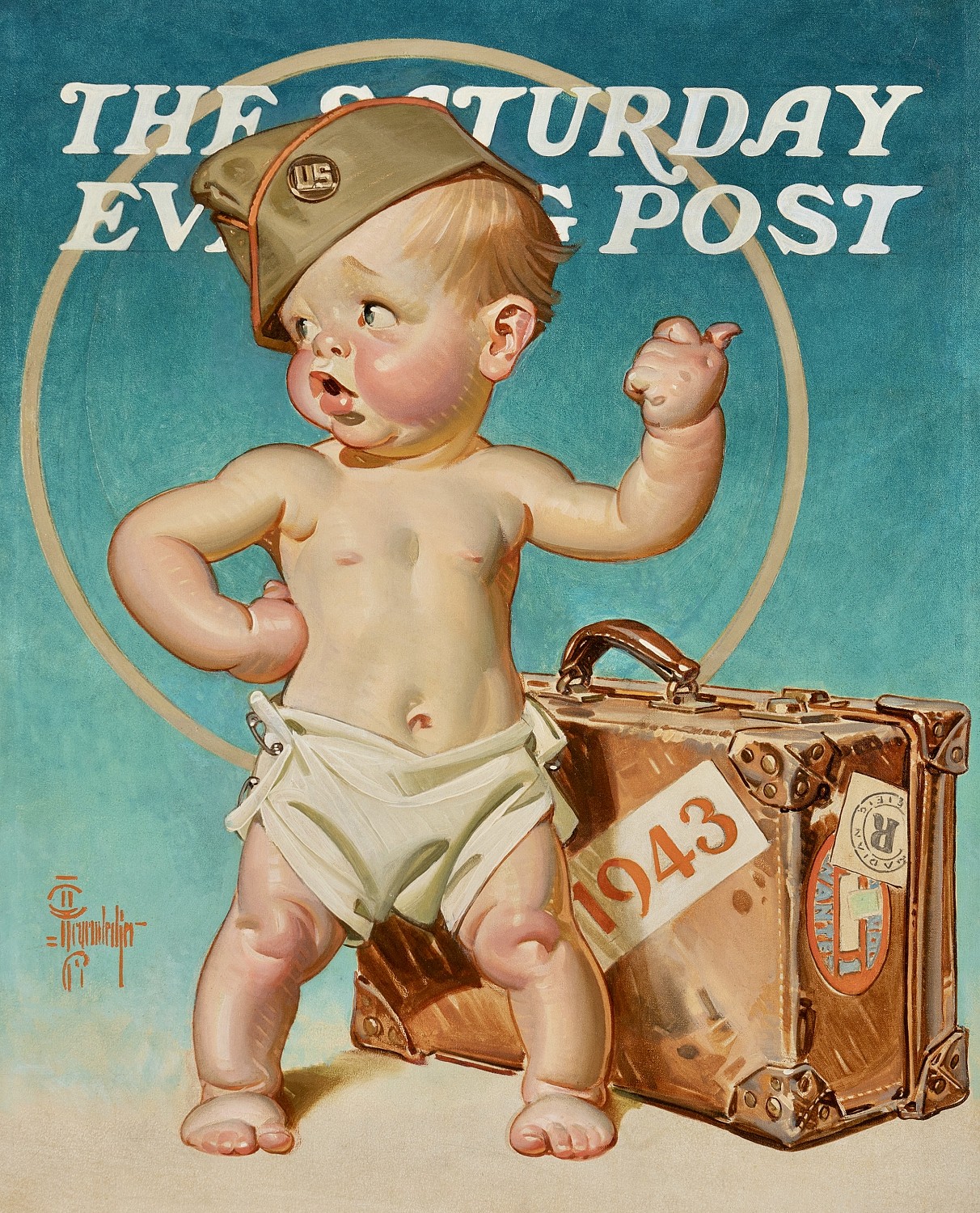 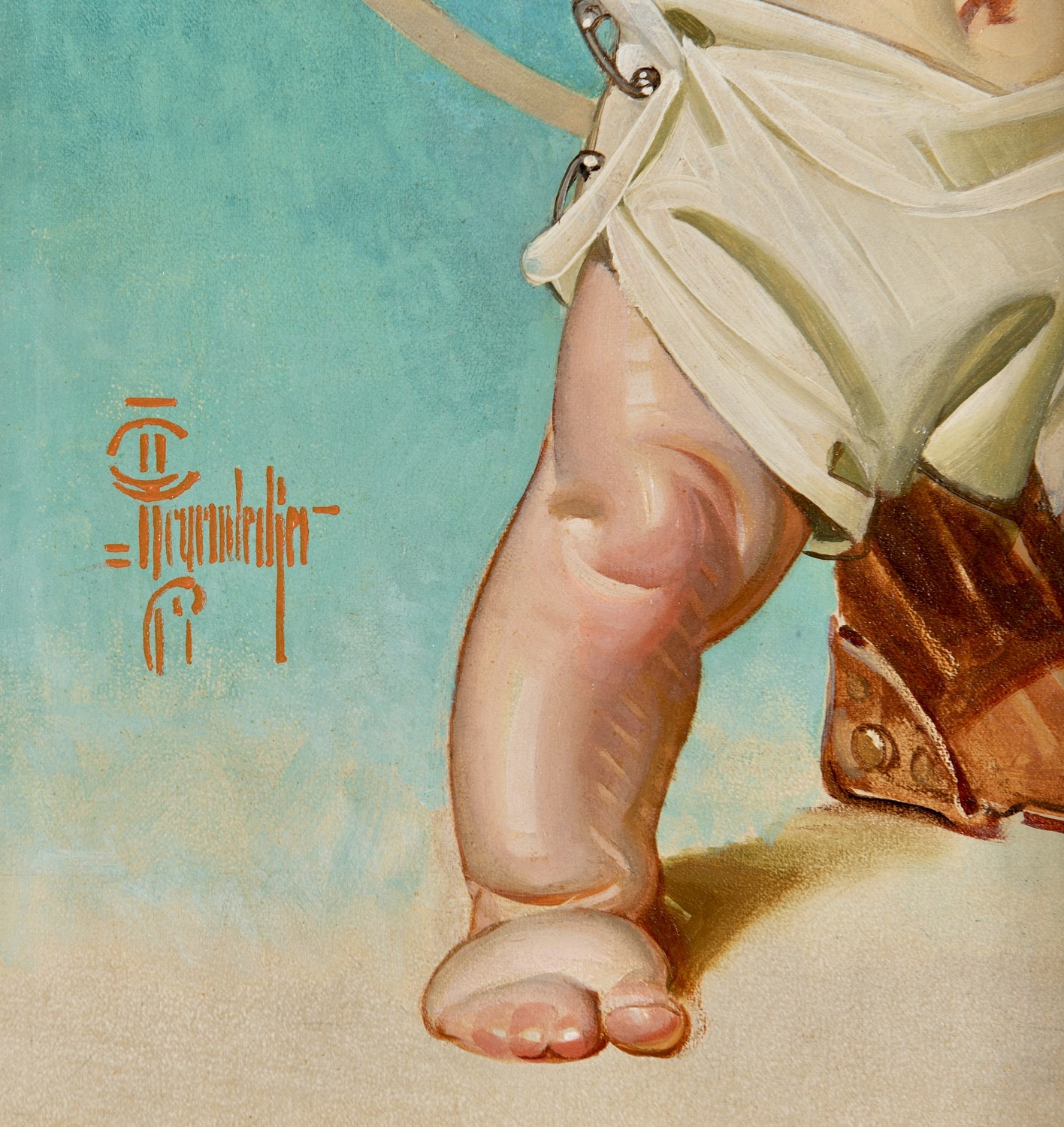 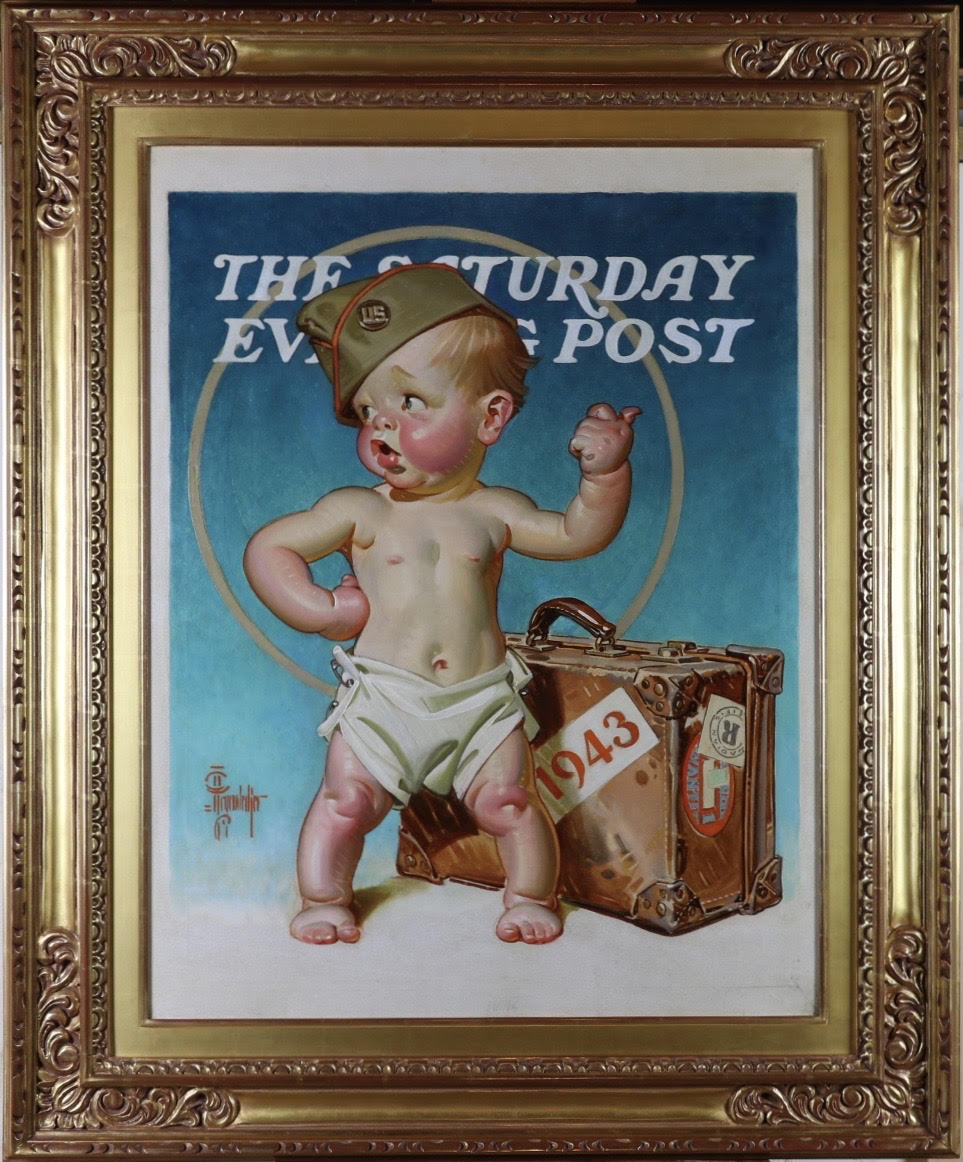 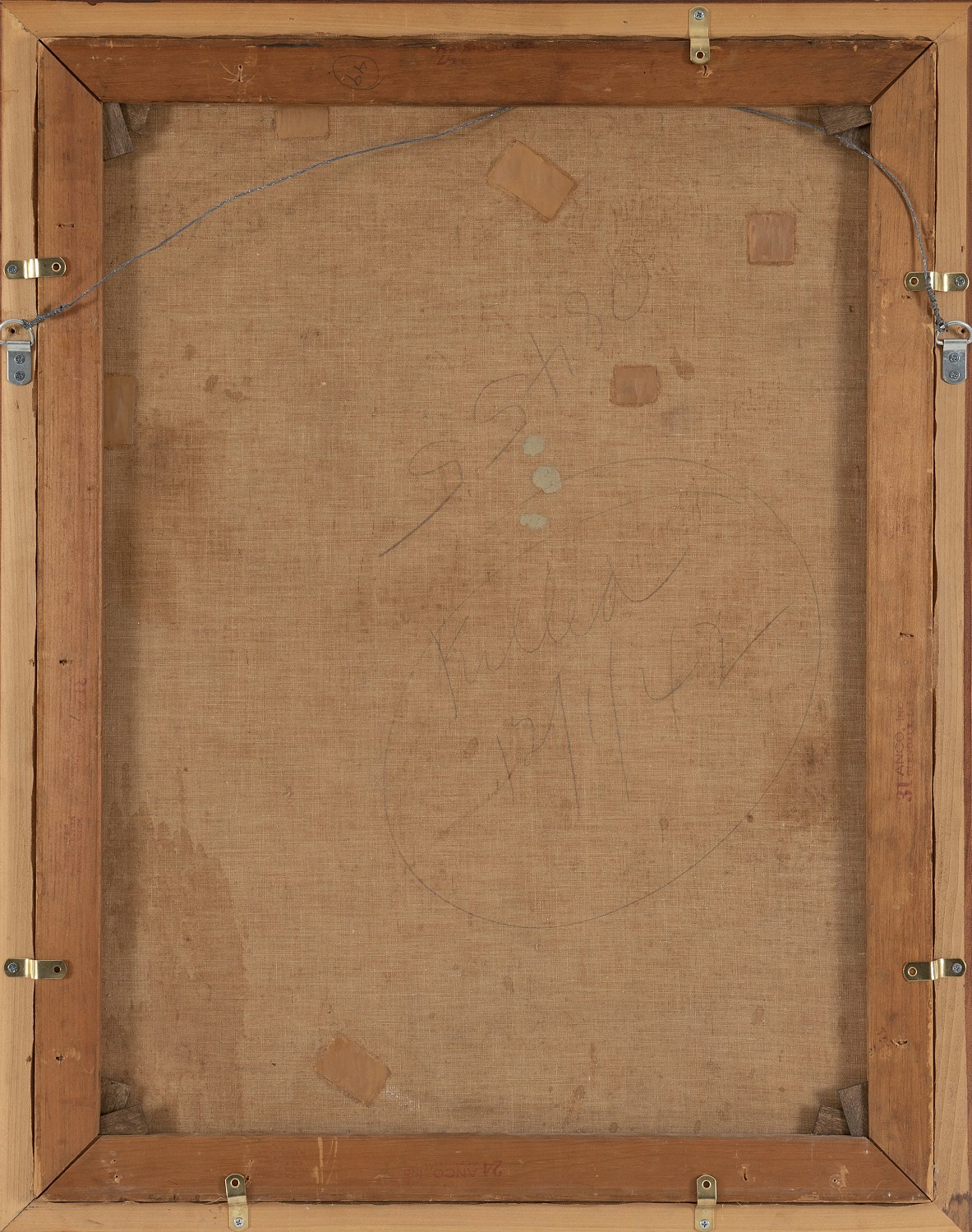 The story behind the New Year's Baby Hitching to War is a fascinating one: The painting was created by Leyendecker to be used as his final iconic New Year's Baby, and his last Saturday Evening Post cover altogether. However, when the Curtis publishing team reviewed the cover, they were concerned it was too unsympathetic to the mothers of America whose sons were headed off to war. Curtis requested that Leyendecker start again, demanding a clearer and more optimistic representation of American patriotism and victory.

On New Year's Day 1943. The state of war and its outcome were in doubt. The United States had lost ground in the Pacific, the Italian and Northern African fronts had brought few victories, and the Invasion of Normandy was over a year and half away. Leyendecker captures this feeling with the slightly befuddled and uncertain expression on the baby's face that is in direct contrast to his strong and puffed-up stance, as he attempts to hitch a ride to the battle front. The painting leaves the viewer relating to the baby's mixed emotions- he clearly feels a sense of duty, as evidenced by his strong stance-yet his confidence is betrayed by the look of fear and uncertainty in his eyes. It was likely this insecure, apprehensive expression that felt too close to home with Curtis publishing team. After all, this innocent, chubby-cheeked baby was an everyman, representing American's sons, brothers, fathers, and husbands headed to an uncertain fate in a war with no visible end.

In response to Curtis' request for a more assured and patriotic message, Leyendecker delivered New Year's Baby at War [1943], a dramatic work illustrating a rosy-cheeked cherub thrusting a bayonet clear through the German Swastika, set against a blood-red background (figure 1). However, with his final printed cover, Leyendecker achieved his intended message, with the baby's shocked and surprised lift of the eyebrows as a result of his violent action.

Despite being an unpublished cover, New Year's Baby Hitching to War perfectly encapsulates the meaning of Leyendecker's beloved New Year's Baby character. Debuting on the cover of the December 29, 1906 Saturday Evening Post, the cherubic baby graced various holiday covers, including Easter and the Fourth of July, but Curtis Publishing soon decided to use the baby exclusively as a New Year's symbol of America's major current issue, such as women's suffrage, Prohibition, entry into WW I, or economic recovery during the Depression. The New Year's Baby was the first cover every year for 37 years from 1906 to 1943. Indeed, the New Year's covers combined the approachable nature of a baby with the harsh realities of adult life prompting readers to consider their own role in current events and how to make the world a better place for children of the next generation.

The present work has never been seen until now, as it has resided with the family of Chairman of the Board and CEO E. Huber Ulrich of Curtis Publishing in the mid-1940s New Year's Baby Hitching to War offers discerning collectors the rare opportunity to own a piece of American History as well as Leyendecker's secret, previously unknown masterwork for The Saturday Evening Post.