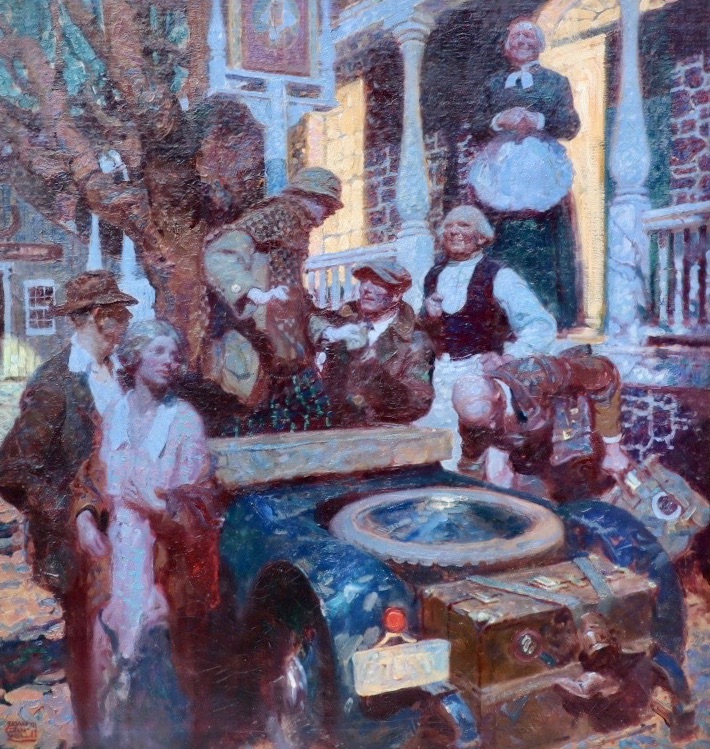 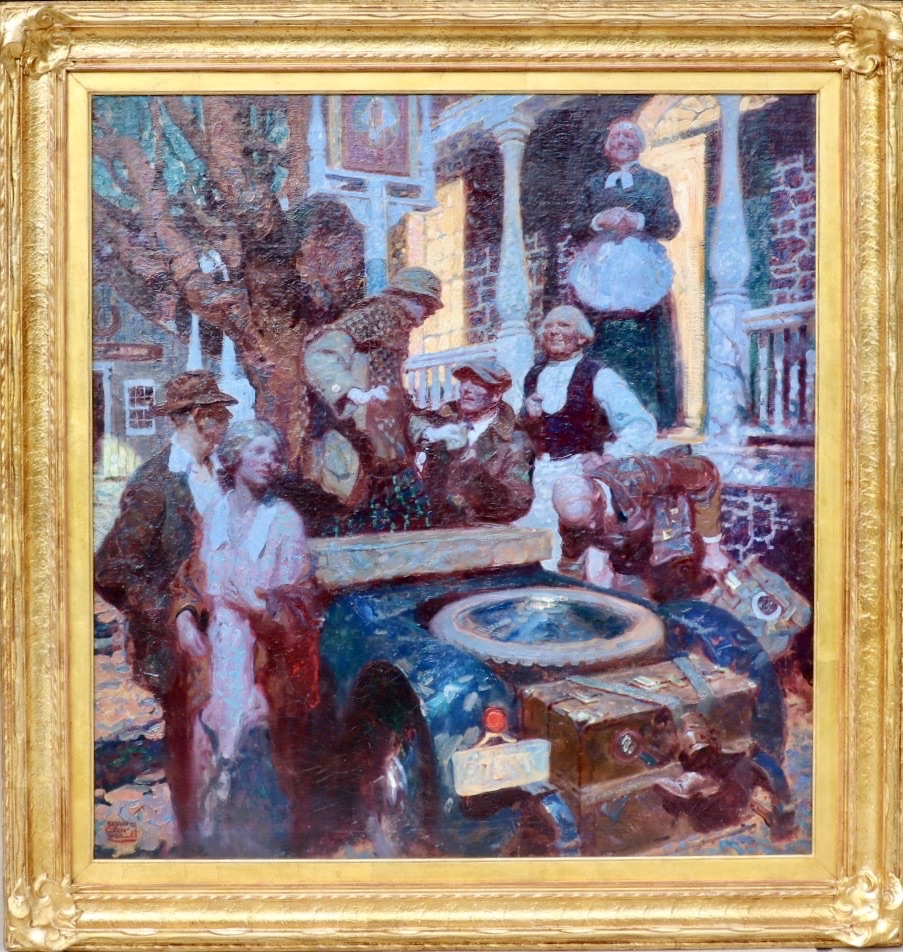 Dean Cornwell's advertisements for companies like Coca-Cola, Palmolive Soap, and Philadelphia Blended Whiskey are as chock full of atmosphere and narrative drama as his magazine story illustrations. The present work graced one of eleven advertisements in ""The Great Things of Life"" series, commissioned by General Electric, which ran in monthly 1921 editions of The Saturday Evening Post. Each of these ads, designed by a different artist - among them, Arthur I. Keller, Elizabeth Shippen Green, Clarence F. Underwood, and Sarah Stillwell Weber -- suggested that the warmth of the Edison Mazda Lamp, or incandescent light bulb, went hand in hand with middle-class virtues and opportunities, including ""Reverence,"" ""Contentment,"" ""Gratitude,"" and ""Chums."" For ""Travel,"" Cornwell imaged a honeymooning couple disembarking from a car, about to enter a brightly illuminated inn: ""The Honeymoon Trail is a trail of Light -- Soft lights, orange blossoms, and solemn vows - A handful of confetti, laughing goodbyes and a porch--light smiling its happy farewell -- Bright headlights throwing their radiance over the road; and the lights of welcome in an old-fashioned inn -- So another couple sets forth on the honeymoon trail -- a trail that lingers in memory as long as life lasts, indelibly etched by the magic of light. We speak of life as a journey; have you ever stopped to think how much Edison Mazda Lamps contribute to the pleasure of the journey?"" (General Electric advertisement, The Saturday Evening Post, 1921). The present work is accompanied by three copies of the advertisement as featured in The Saturday Evening Post. "

Dean Cornwell, born in 1862, was an American artist who was best known as a muralist and for his famous illustrations in national magazines including Harper's Bazaar, Redbook, and Cosmopolitan. He was born in Louisville, Kentucky and as a child observed his civil engineer father do industrial drawings, which led to his interest in art. Cornwell studied at the Art Institute of Chicago and built his career as a cartoonist for the Lousiville Herald and the Chicago Tribune. Cornwell illustrated the works of some of the most famous names in the literary world, including Edna Ferber, Ernest Hemingway, Pearl S. Buck, and Somerset Maugham. He also created murals for the 1939 World's Fair, Bethlehem Steel, and the General Motors Building in New York City. Cornwell's spectacular murals grace buildings throughout the country. Some of the most well known are at 10 Rockefeller Center, the Los Angeles Public Library which illustrates the history of California, and the Lincoln Memorial Shrine in Redlands. The Los Angeles Public Library and Redlands projects took five years to complete. Cornwell had contacts with major companies including Palmolive, Coca Cola, Squibb, Seagram's Gin, and New York Life. Some of Cornwell's most famous murals and ads include the Natchez/Lee Paddlwheel Race, Ivory Soap, Woodbury Soap, The Pennsylvania Railroad, and the""Spirit of 1943."" Illustrations, murals, and ads created by Cornwell helped to promote the war effort during the 1940s. During his career, Cornwell was elected to the National Academy of Design and was president of the Society of Illustrators. Dean Cornwell died in 1960."