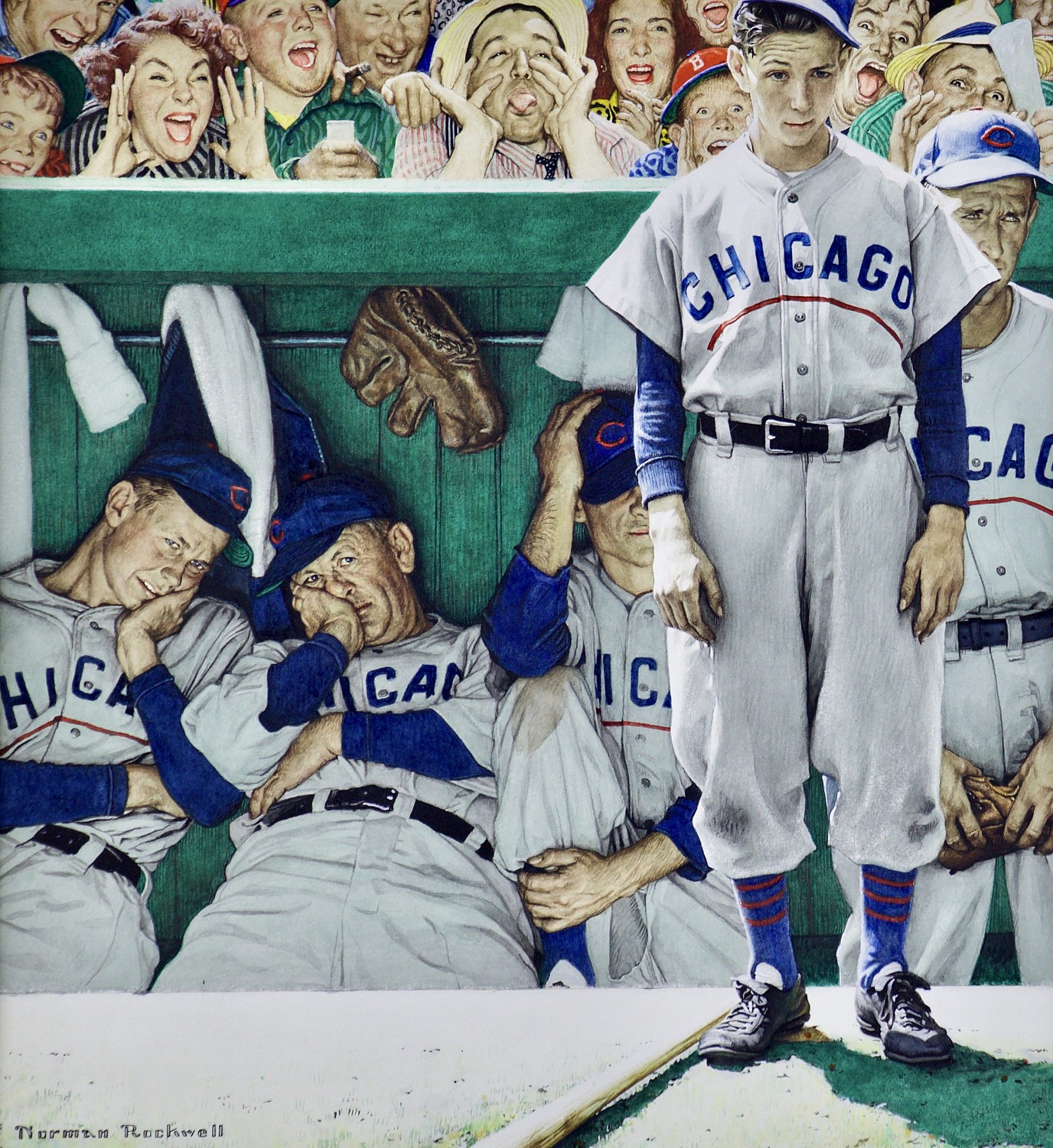 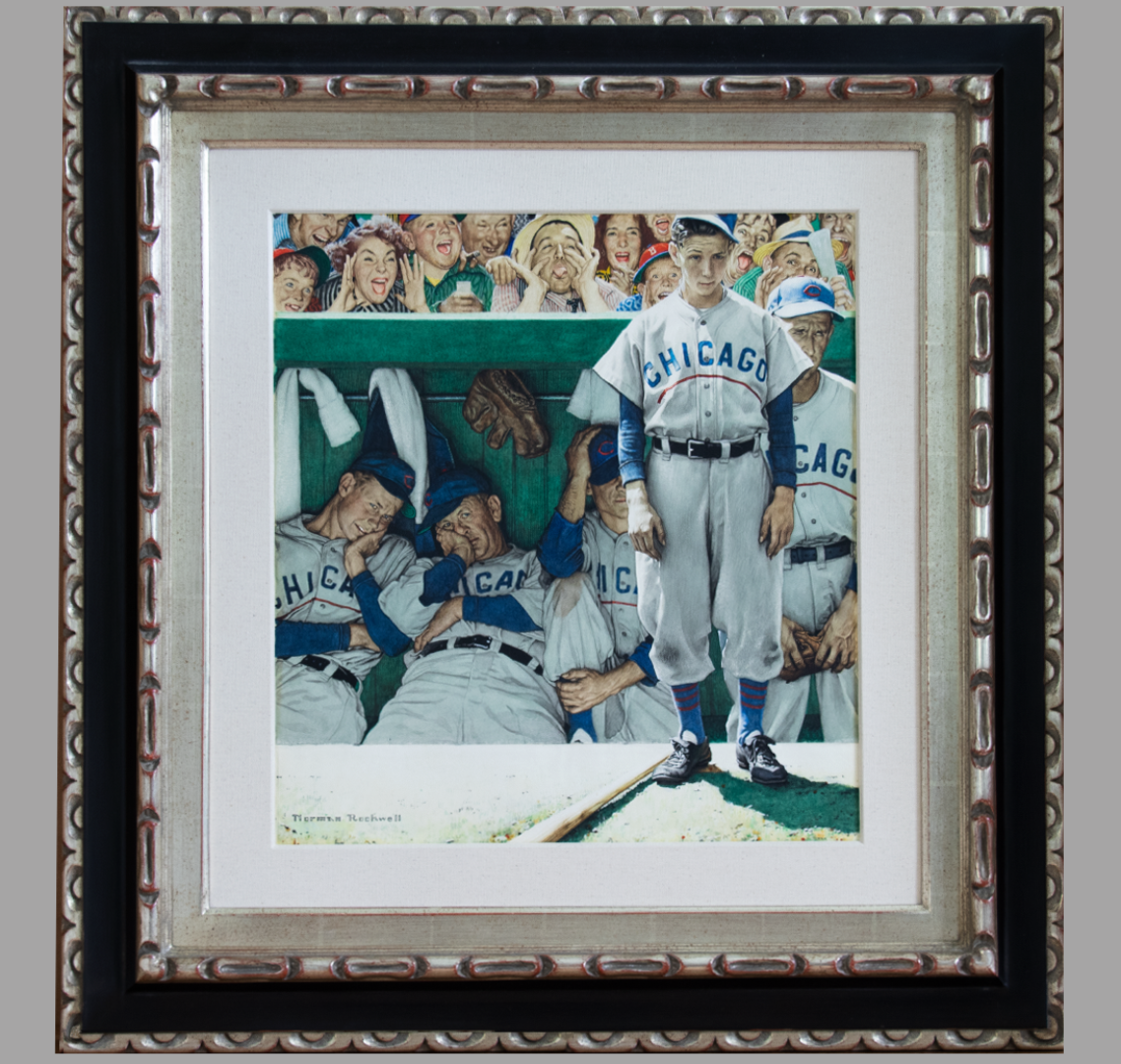 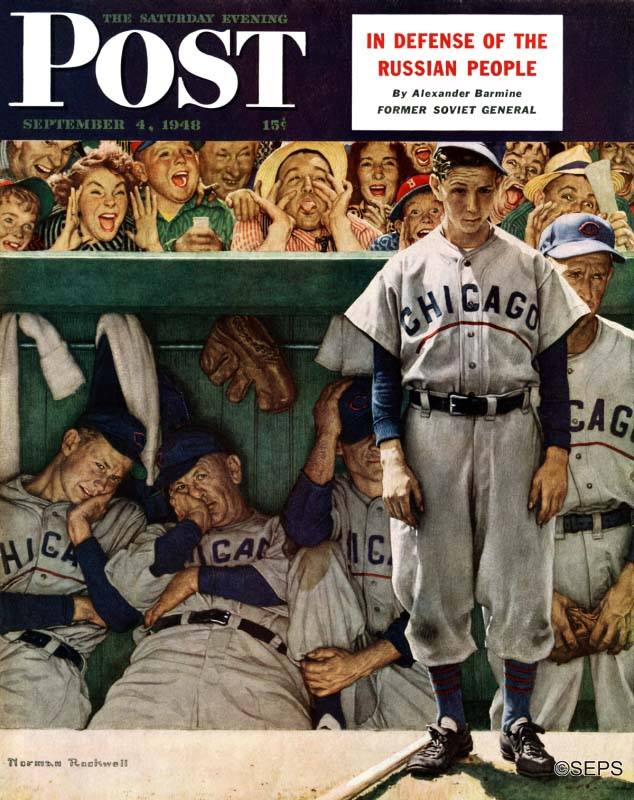 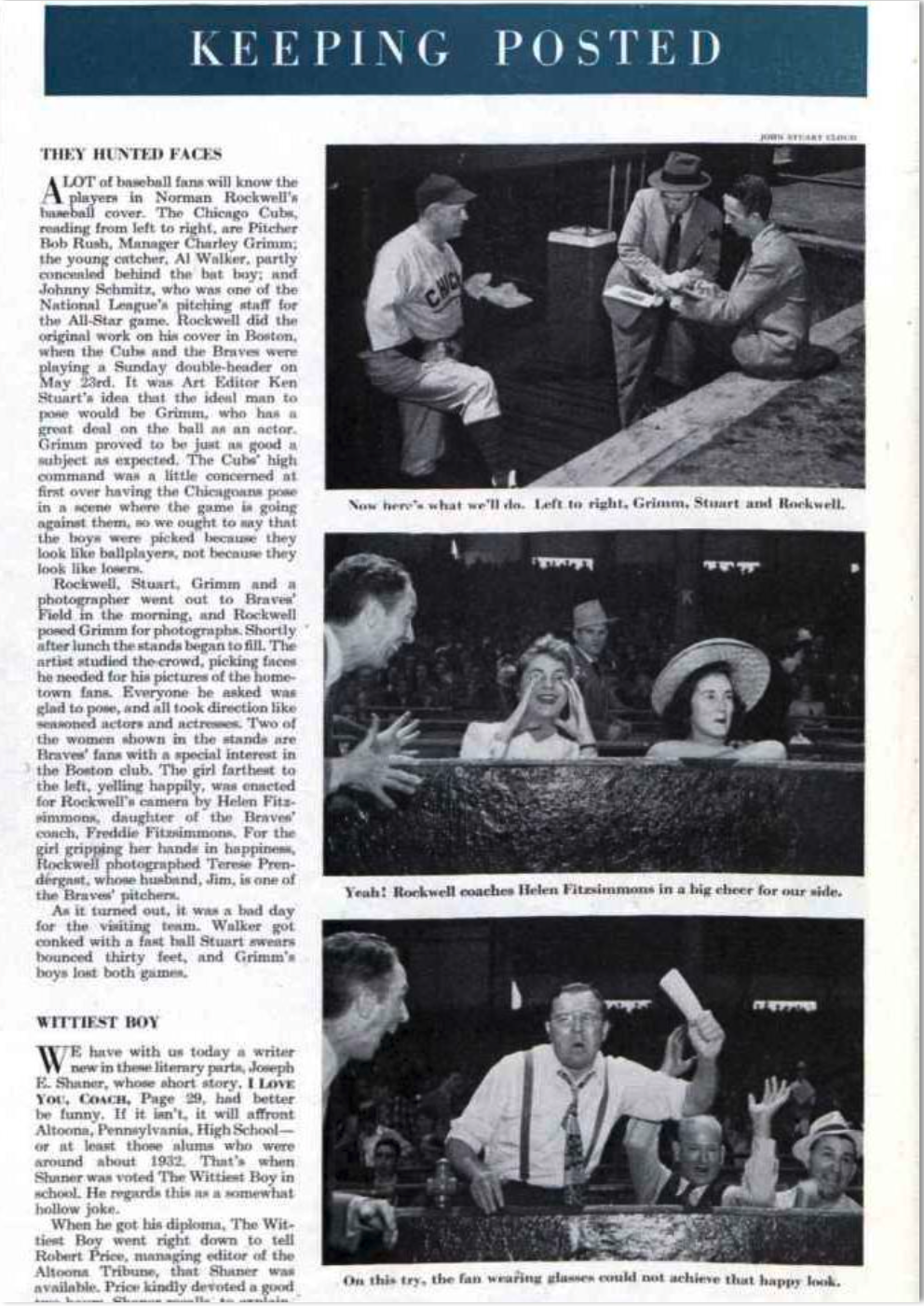 The present work was published on the cover of the September 4th, 1948 edition of The Saturday Evening Post. An accompanying “Keeping Posted” article about Norman Rockwell’s process behind the painting was printed on page 10 inside the issue. (Image above)

Brooklyn, New York, The Brooklyn Museum, Norman Rockwell and a Century of American Illustration, March 22-May 14, 1972.

Rockwell Video Minute: THe Chicago Cubs in "The Dugout"

“Boston baseball fans saw a strange spectacle at Braves’ Field early this summer. As the stands filled, two respectable-looking men stood on the field starting at the spectators. Every now and then they would point to someone, run up into the stands and invite the man or woman to sit in a box above the dugout. Then the thinner of the two would contort his face into an expression of wild delight or disgust and invite the spectator to do the same, while a photographer made pictures. The explanation is on our cover. The two suspicious characters were Kenneth Stuart, the Post’s art editor, and the artist, Norman Rockwell.” (The Saturday Evening Post, September 4, 1948, p. 3)

“A lot of baseball fans will know the players in Norman Rockwell’s baseball cover. The Chicago Cubs, reading from left to right, are Pitcher Bob Rush, Manager Charley Grimm; the young catcher, Al Walker, partly concealed behind the bat boy; and Johnny Schmitz, who was one of the National League’s pitching staff for the All- Star game. Rockwell did the original work on his cover in Boston, when the Cubs and Braves were playing a Sunday double-header on May 23rd. It was Art Editor Ken Stuart’s idea that the ideal man to pose would be Grimm, who has a great deal on the ball as an actor. Grimm proved to be just as good a subject as expected. The Cubs’ high command was a little concerned at first over having the Chicagoans pose in a scene where the same is going against them, so we ought to say that the boys were picked because they look like ballplayers, not because they look like losers.

Rockwell, Stuart, Grimm and a photographer went out to Braves’ Field in the morning, and Rockwell posed Grimm for photographs. Shortly after lunch the stands began to fill. The artist studied the crowd, picking faces he needed for his pictures of the hometown fans/ Everyone he asked was glad to pose, and all took direction like. Seasoned actors and actresses. Two of the women shown in the stands are Braves’ fans with a special interest in the Boston club. The girl farthest to the left, yelping happily, was enacted for Rockwell’s camera by Helen Fitzsimmons, daughter of the Braves’ coach, Freddie Fitzsimmons. For the girl gripping her hands in happiness, Rockwell photographs Terese Prendergent, whose husband, Jim, is one of the Braves’ pitchers.

As it turned out, it was a bad day for the visiting team. Walker got conked with a fast ball Stuart swears bounced thirty feet, and Grimm’s boys lost both games.“ (Keeping Posted, Page 10 of Saturday Evening Pos September 4, 1948)