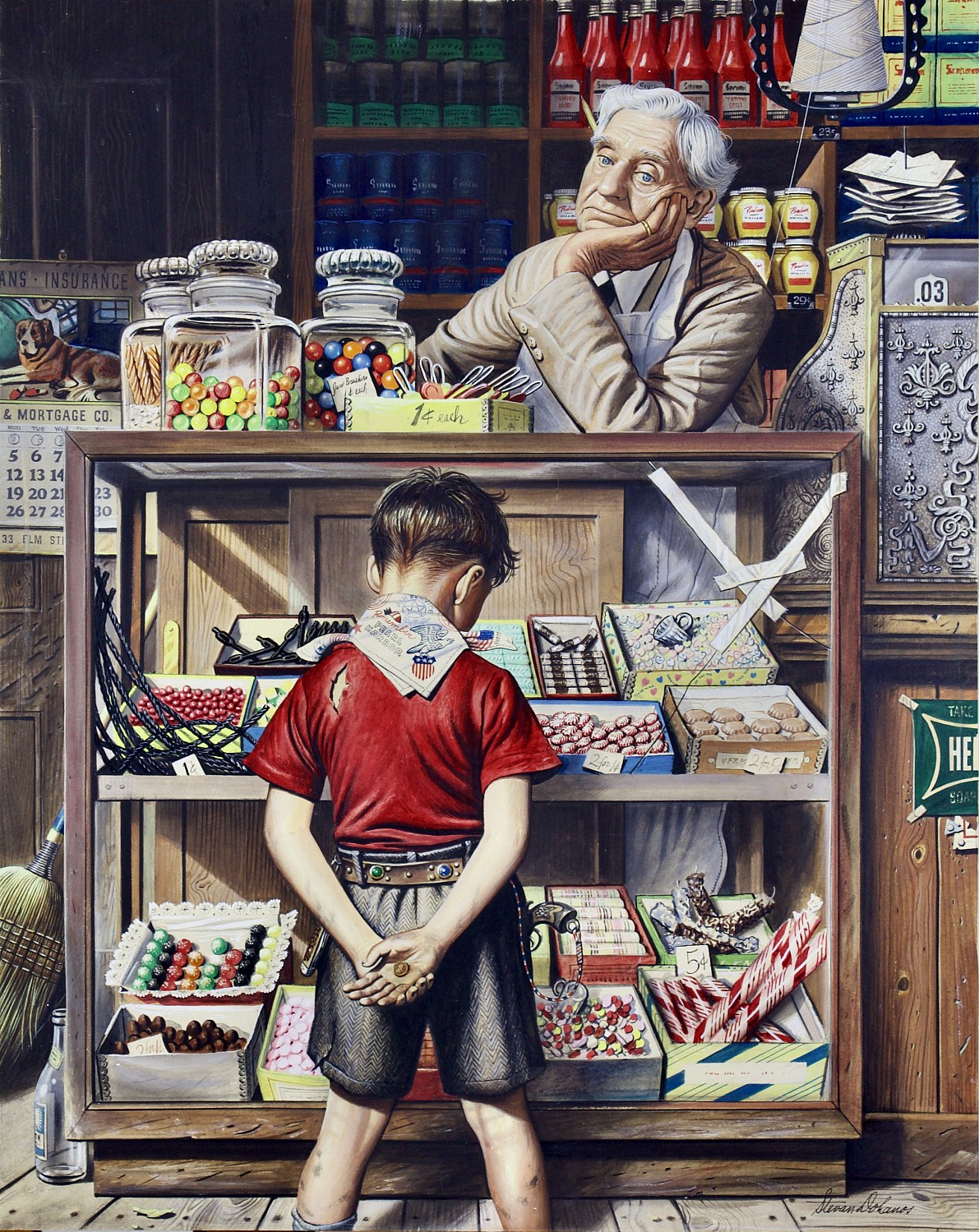 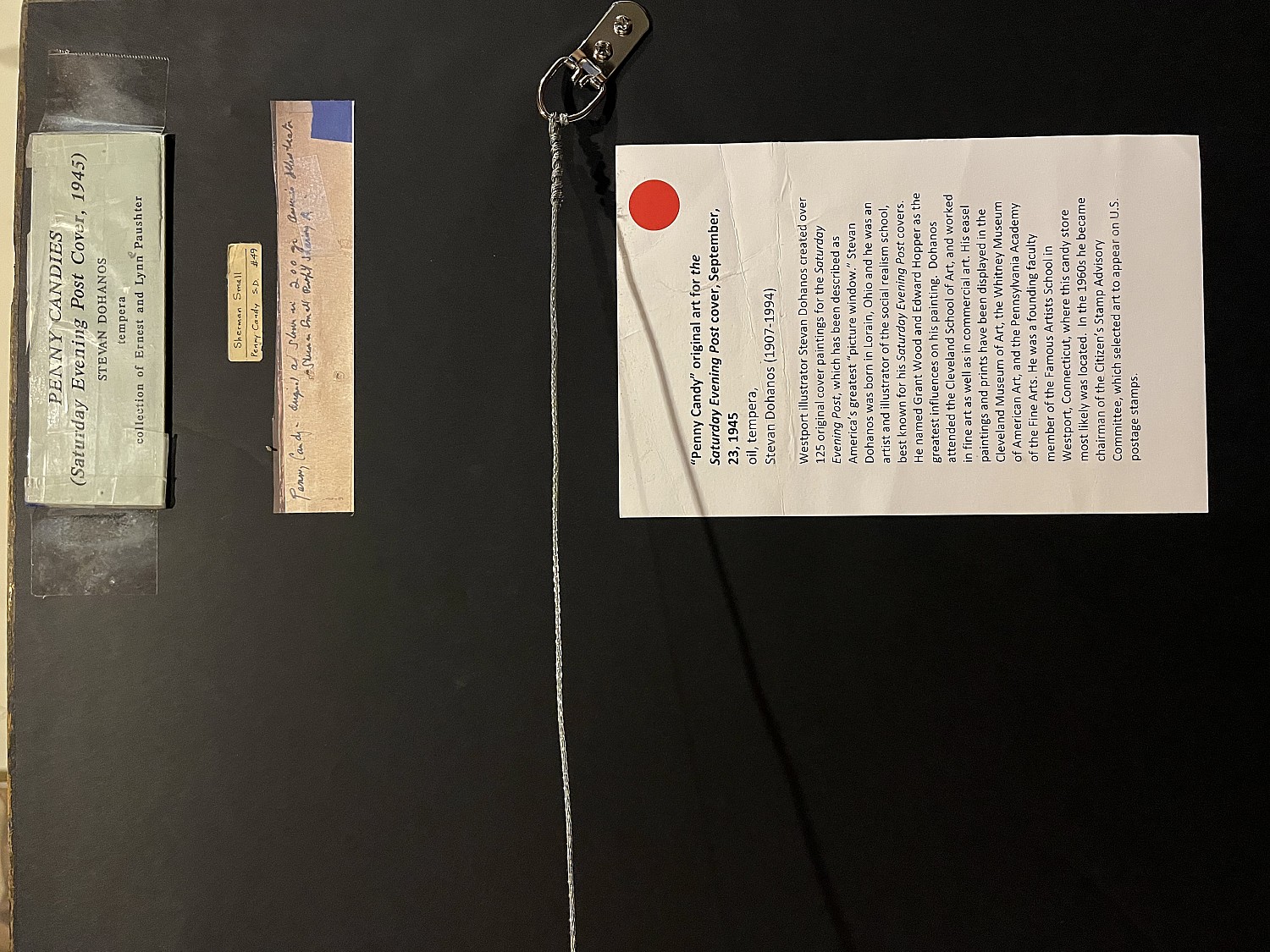 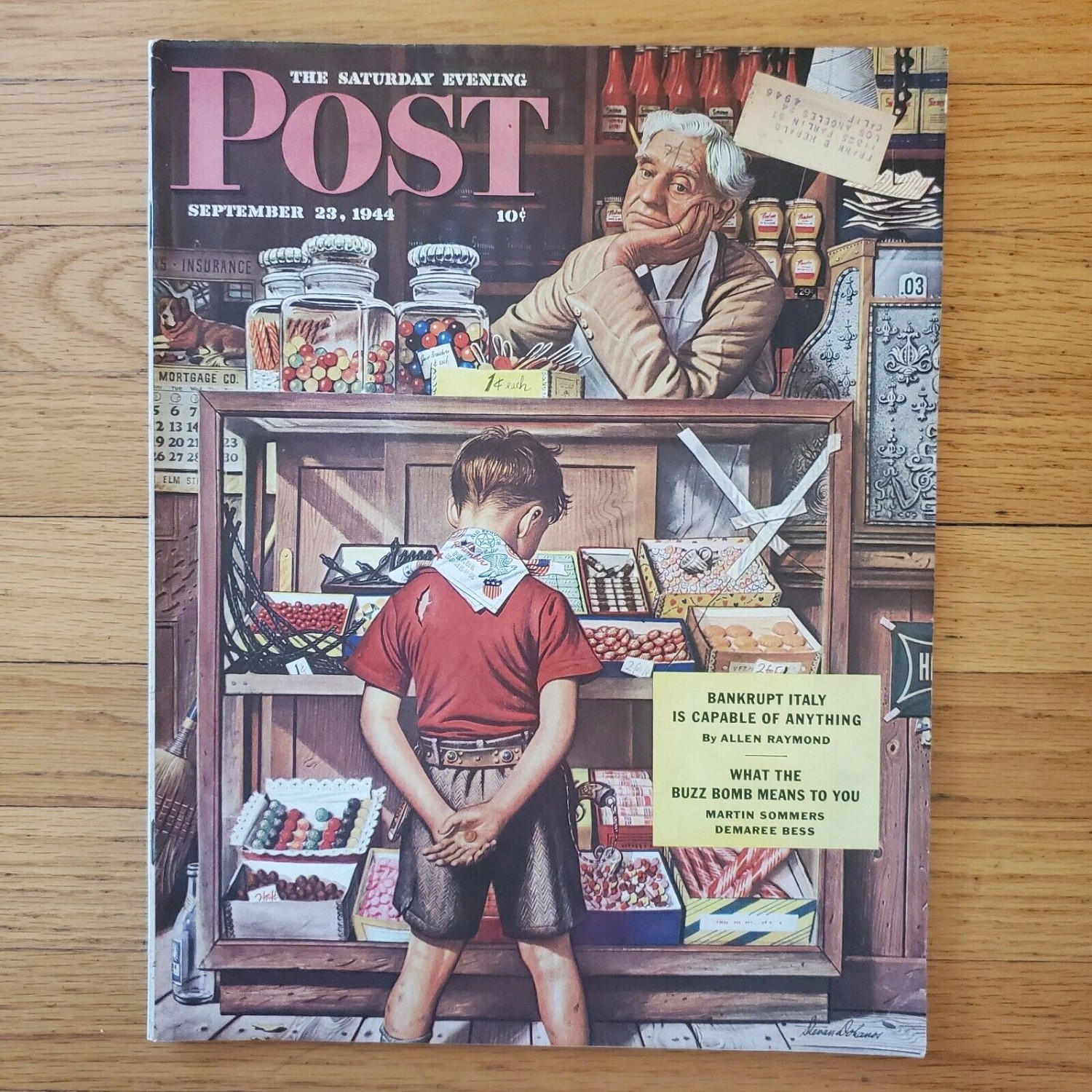 A proponent of simplicity as a virtue, Stevan Dohanos has said, "A clean, strong, uncluttered image forms the basis of a good picture." Prior to the introduction of television as a medium, The Saturday Evening Post had great influence, as it was likely the most widely followed exponent of American popular culture. Dohanos' work appeared frequently on its covers, making the artist seem to be their cultural spokesperson.

Dohanos painted over one-hundred and twenty-five Saturday Evening Post covers during the 1940's and 50's, illustrating scenes of American life including baseball games, ice cream, mobile homes, gas stations, children with toys or butterfly collections, barns, and families enjoying all walks of ordinary life. Of the many masterworks Dohanos created, Penny Candy, the cover of the September 23, 1944 Saturday Evening Post, is widely considered his tour de force; his Mona Lisa.

One cannot discuss the illustration art of Dohanos without mentioning Norman Rockwell, because their Saturday Evening Post cover images are invariable compared. Dohanos along with Rockwell came to represent the quintessence of American magazine illustrators. His images were generally slightly humorous, optimistic, manifesting the best of American ideals, and they were always familiar to the reader. Dohanos is considered "The Delineator of the Heart of America."

Whereas Rockwell was noted for idealizing Americans and their way of life, Dohanos had an all-consuming love for the common everyday things in life. He stated "As an artist I have always gloried in finding beauty in the ordinary things of life." He named Grant Wood and Edward Hopper as the greatest influences on his painting.

Dohanos was also influenced by early twentieth-century American Ash Can painters known as 'The Eight' (Robert Henri, John Sloan, William Glackens, Everett Shinn, Maurice Prendergast, Arthur B. Davies, Ernest Lawson, George Luks) and the realistic depictions they painted, saying, "the truth and quality of the art could not be long denied." He was truer to fact and form than Rockwell who tended to over indicate and exaggerate. The difference between the two illustrators is more obvious in their choice of subjects rather than in their techniques. It is said that Dohanos focused more on the locale of the people he portrayed rather than the people themselves, making him more objective than Rockwell.

Dohanos was known for taking infinite pains in creating his illustrations. Often, they harked back to people and places from his childhood or incidents he observed in rambling about the countryside. Whatever scenes they represented, his paintings were illuminated by his kind, earthy humor and his passionate love for the American scene.

In his masterful and cinematic Penny Candy, Dohanos depicts a scene right out of every person's childhood storybook: A young boy, dressed like Howdy Doody in his rough and tumble, tattered and torn red shirt and bandana, stands with his muddied legs firmly rooted and his soiled hands hidden behind his back, as he takes a break from his playtime shenanigans to buy himself a cheap treat. He gazes at the assortment of penny candy laid out before him like a sea of gold, as the elderly counter man stares off, head in hand and mind elsewhere, bored and daydreaming, waiting for his little patron to select a sweet treat.

Every detail of this composition is painted impeccably, as the artist spared no artistic element in creating this flawless scene: Each colorful gumball shines, every sheet of paper above the cash register is delineated, every hair on the figures' heads is unique. The painting explodes with color, form, light and shadow, resulting in what is arguably the finest and most complex scene the artist produced. It is no wonder that one cannot walk into a vacation town candy Shoppe without seeing a poster of this very work.

The image of Penny Candy may be found today in many iterations: As posters, puzzles, magnets, and calendars, and mugs. It is fitting that the artist's sensitive portrayals of common American subjects have landed his paintings in the permanent collections of the Cleveland Museum of Art, the Whitney Museum of American Art, New York, the Pennsylvania Academy of the Fine Arts, and Dartmouth College, among many others.