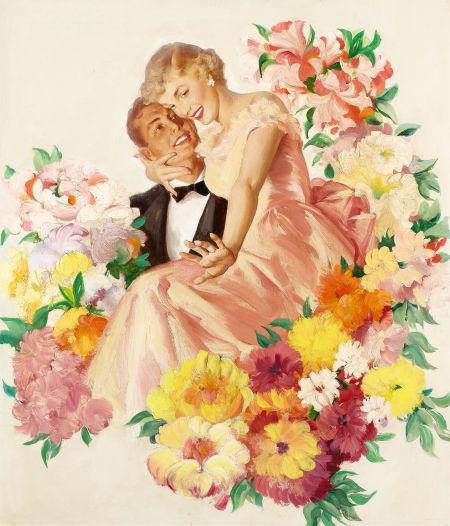 Haddon Hubbard Sundblom influenced the world of advertising art for nearly forty years, winning many medals and citations.  Among the companies he worked for were:  Coca -Cola, Maxwell House, Procter and Gamble and Palmolive Peet.  Many believe he was the creator of the modern Santa Claus, and for over twenty years, he modeled for the Santa that appeared in Coca-Cola ads on the back cover of many magazines.  His influence extended to a group of young artists in the Sundblom Circle who adopted his style and went on to become successful illustrators.  Among them were:  Thornton Utz, Coby Whitmore, Matt Clark and Harry Anderson.

His most famous ads were those painted for Cashmere Bouquet Soap.  This painting shows a beautiful couple surrounded by flowers, reminiscing with a family album.