What would Rockwell say about his likeness on a $50 bill? 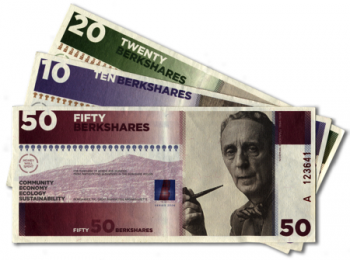 Dubbed a “great economic experiment” by the New York Times, BerkShares, is a western Massachusetts experimental local currency. Designed to support and encourage use and trade of local goods and services it offers a community based alternative economic system as an incentive to think and buy local promoting and supporting community businesses and by extension the community as a whole.

Heavily researched and planned for years, BerkShares became the most successful economic exchange program of it’s kind in the country. Launched in the fall of 2006 with over one million in circulation within the first nine months; it has grown to over 2.7 million to date with more than 400 businesses accepting the currency. Five different banks and13 branch offices serve as exchange stations where BerkShares are purchased for 90 cents on the dollar and are an equal exchange to a dollar.

Not a replacement for US currency, BerkShares do not compete with the dollar; they incentive to shop locally rather than at large national chains like Wal-Mart or Target. Research shows a simple 10% shift in shopping revenue from large chains to local merchants has a vast positive effect on the local business community.

Throughout the decades your positive influence continues to perpetuate itself. Thank you Norman Rockwell.