Below is a copy of the NYT article announcing major Rockwell SEP covers going up for sale at Sotheby’s in December. This has huge implications on the value of all Rockwell original paintings, and tremendous effect on the value of the SEP covers.

If you ever were thinking about purchasing a Rockwell original painting, DO NOT WAIT. After this auction they may be totally out of reach. See what we have available in the illustrated gallery vault. Be sure you have full access to be able to view all that are available.

They are three of Norman Rockwell’s best-known paintings of homey, small-town America published on the covers of The Saturday Evening Post — “Saying Grace,” “The Gossips” and “Walking to Church.” 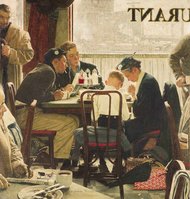 “Saying Grace,” one of three paintings by Norman Rockwell set for auction on Dec. 4, is expected to draw bids of more than $15 million.

A sortable calendar of noteworthy cultural events in the New York region, selected by Times critics. 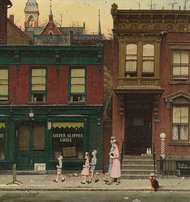 Sotheby’s will auction “Walking to Church” (1953), owned by the family of Kenneth J. Stuart, who was art director of The Saturday Evening Post. 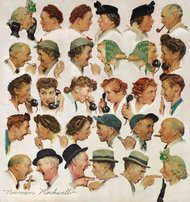 But the decision to auction them atSotheby’s in December will signify the end of a decade of unhomey legal squabbling among the heirs of the art director who gave Rockwell his assignments from World War II to the eve of the Vietnam War.

“It’s time to move forward,” said Jonathan Stuart, a son of the artworks’ original owner, Kenneth J. Stuart, who was the longtime art director of The Saturday Evening Post.

Of Rockwell’s 322 covers for The Post, the three images were particularly popular. “Saying Grace” — a crowded restaurant with a boy and an old woman bowing their heads in prayer — was considered Rockwell’s masterpiece, topping a readers’ poll in 1955. “The Gossips” was a finger-wagging montage of friends, neighbors and even the artist himself. “Walking to Church” was another timeless favorite.

Some scholars of American art predict that the sale of these paintings on Dec. 4 could become — given their caliber, celebrity and condition — the auction of the year in an area of the art market that has not bounced back since the collapse of the world financial markets in 2008. Experts say that two have a chance of topping the record price for Rockwell at auction, $15.4 million, which was set in 2006 for “Breaking Home Ties,” an image of a fresh-faced boy leaving home for the first time.

“They are iconic images of 20th-century American culture, all three of them,” said Virginia M. Mecklenburg, chief curator of the Smithsonian American Art Museum in Washington, who organized a blockbuster Rockwell show there in 2010.

“Each one of these paintings is just as relevant now as when they were made,” she added.

For the sons of Kenneth J. Stuart, though, the story behind the sale is not so cozy.

Curtis Publishing, which owned The Saturday Evening Post, tried, unsuccessfully, to claim ownership of the paintings. (The company does have reproduction rights to the images on countless objects, including mugs and mouse pads, porcelains and playing cards.)

Heirs of Kenneth Stuart were embroiled in their own legal battles, too, when he died in 1993. He left his entire estate to his three sons — Ken Jr., William and Jonathan — in equal shares. But shortly after his death William and Jonathan sued their older brother, Ken Jr., claiming that he had taken advantage of their ailing father, forcing him to sign papers to gain control of the fortune, and contending that Ken Jr. had used estate assets for his own expenses. Only recently did the brothers settle out of court.

“It’s been a long road,” said Jonathan Stuart, the youngest brother, in an interview.

The value of the three paintings was next to nothing when they were produced in the late 1940s and early ’50s, but Mr. Stuart now called them “precious heirlooms” — so precious, in fact, that he and his brothers simply could no longer afford the insurance and upkeep.

Sotheby’s estimates that “Saying Grace,” on the cover of the Nov. 24, 1951, issue, could bring at least $15 million to $20 million. The painting hung in Kenneth J. Stuart’s office at The Saturday Evening Post and later in his family’s living room in Wilton, Conn. “Walking to Church,” thought to bring between $3 million to $5 million, was in the bedroom of his wife, Katharine.

“Dad never hung ‘Gossips,’ ” Jonathan Stuart said. “None of us could figure out why.” That painting is expected to fetch $6 million to $9 million.

Mr. Stuart, 67, who lives in Manhattan and owns a record company, recalled that when he was a teenager his parents often left him at the Rockwell home in Stockbridge, Mass., where the artist lived from 1953 until his death in 1978.

“I wish I’d known when I was hanging out in his studio and he was teaching me how to draw a horse how famous he’d become,” Mr. Stuart said. “I would have gotten him to sign one of his teaching sketches.”

He described his father and Rockwell as “best friends.” The elder Kenneth Stuart also created covers for The Saturday Evening Post before becoming the magazine’s art director.

“As an artist Ken Stuart knew how to talk to Rockwell,” said Elizabeth Goldberg, director of American art at Sotheby’s. “But he also had an uncanny commercial sense.”

The working relationship between Rockwell and Kenneth Stuart was casual. “Norman would show him seven sketches and he’d say, ‘I like them, let’s do them all,’ ” Jonathan Stuart recalled. “Nobody had worked like that with him before.” Mr. Stuart also paid Rockwell twice as much as other cover artists received. In 1951, for instance, he earned $3,500 for “Saying Grace,” about $30,500 today.

Over the years Rockwell simply gave many of the paintings to Kenneth Stuart.

Jonathan Stuart recalled that Rockwell worked “like a theatrical director.” First Rockwell would set up a scene, using friends, neighbors, even his wife, Mary, often shooting hundreds of photos until he was satisfied. From those shots he would make charcoal sketches, then oil sketches, followed by the final painting.

His eye for detail was impeccable. In “Saying Grace,” for example, Rockwell drew upon a rich patchwork of ideas. “He visited Automats and diners in New York and Philadelphia to get the scene just right,” Ms. Goldberg said. “He even shipped the table and chairs from one of the diners in Times Square to his studio for the photo shoot. In the end his imagery was so vivid people would say they recognized the diner even though it didn’t exist, each painting felt so universal.”

The idea for “The Gossips” dates to earlier oil sketches of women gossiping. Enlarging his idea, Rockwell included numerous heads — friends, relatives and neighbors. When The Saturday Evening Post cover ran on March 6, 1948, the magazine was flooded with inquiries from readers wanting to know what the heads were gossiping about. “It’s so relevant now,” Ms. Mecklenburg said, “if you think about social bullying and the Internet.”

Rockwell based “Walking to Church,” the April 4, 1953, cover, on the Vermeer painting “The Little Street.” But he translated it to his own urban street scene, depicting family members in their Easter best, each clutching Bibles, from a composite of different buildings in Troy, N.Y., and a church steeple in Vermont.

Despite the impeccable composition of his paintings, art critics dismissed Rockwell for decades, calling his work too saccharine. In 1968 the critic Arthur Danto described it as “a shovelful of stardust.”

But Rockwell’s commercial success was uncontested. And so Sotheby’s campaigned hard to get the business. All details were kept on a secret file in the auction house’s computer system. Knowing that its archrival, Christie’s, was also after the collection, Sotheby’s assigned a code name to the collection: Texas.

On Labor Day “Saying Grace,” “The Gossips” and “Walking to Church” were quietly picked up from the Norman Rockwell Museum in Stockbridge, where they have been on loan for 18 years, and whisked by truck to the auction house, where they will be shown to top collectors. The loss of three of the artist’s best-loved works leaves an irreplaceable hole in the museum’s collection, said Laurie Norton Moffatt, the Rockwell Museum’s director, though she said wistfully that she knew their departure “would likely happen.”

Who will end up buying the paintings is anyone’s guess. Rockwell collectors include the filmmakers George Lucas and Steven Spielberg, as well as the businessman Ross Perot and Alice Walton, the Walmart heiress. “There are also trophy hunters who don’t live here that may try to buy them,” Ms. Goldberg said. “There’s simply no way to know.”

A version of this article appears in print on September 19, 2013, on page C1 of the New York edition with the headline: Rockwell’s America, Newly Up for Bid.