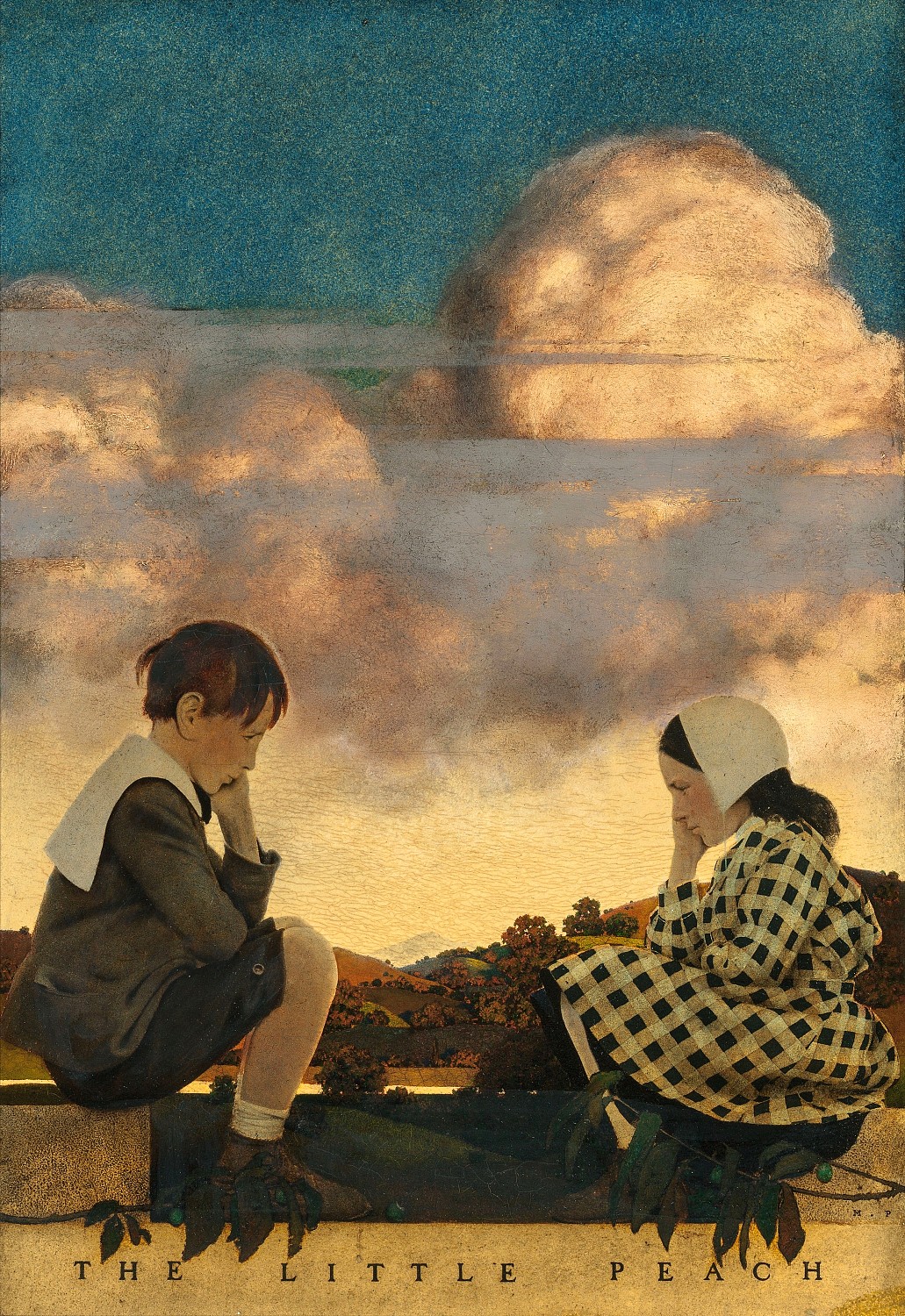 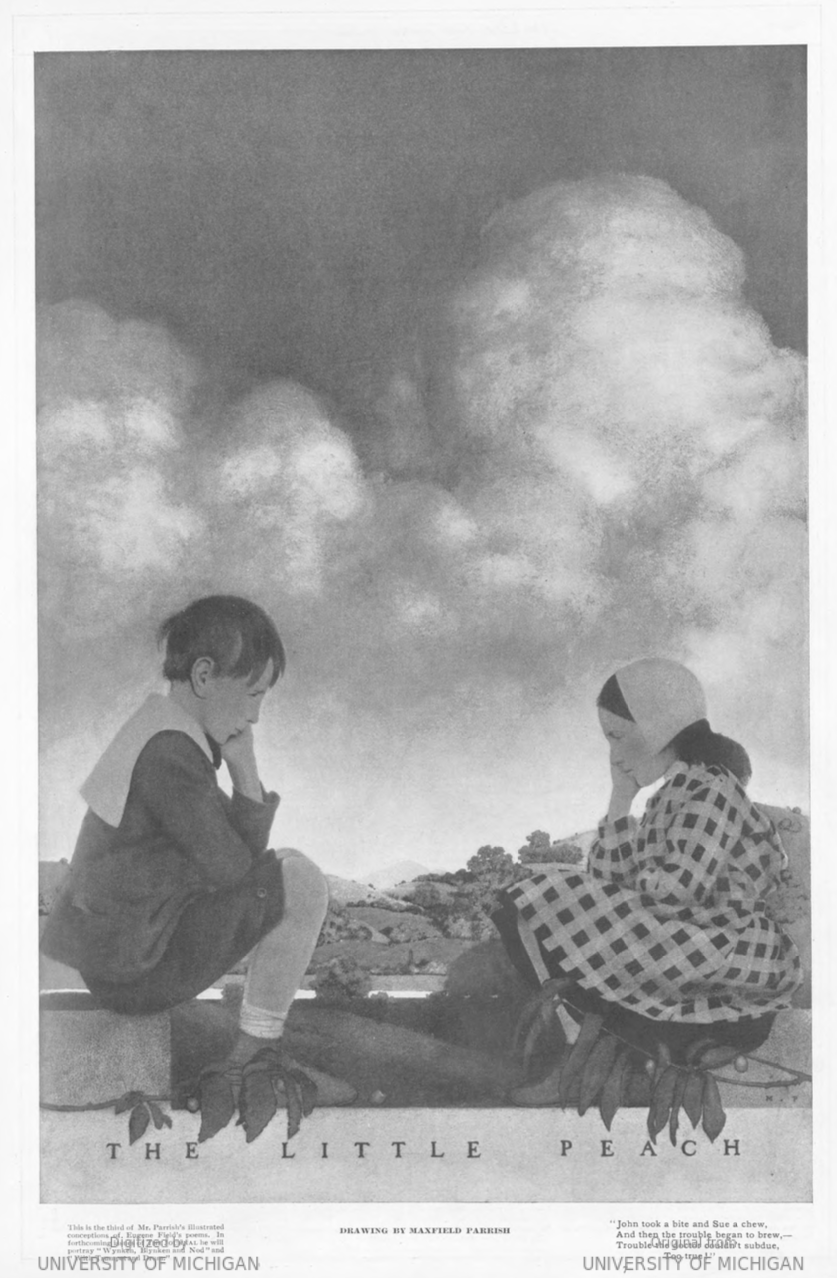 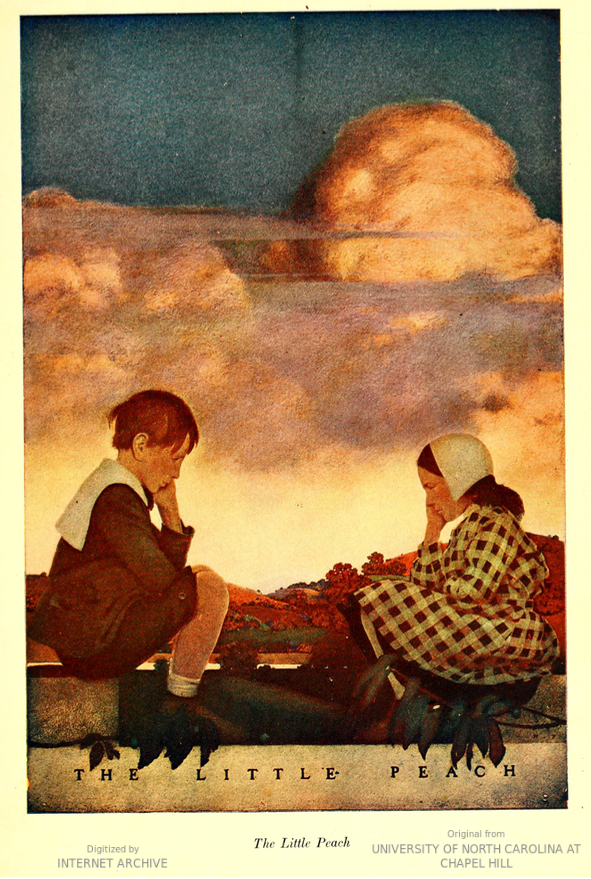 The present work was painted by the artist to accompany the following poem titled, "The Little Peach" from the children's book, Poems of Childhood written by Eugene Field, published in 1904. The boy and girl depicted in this narrative are likely John and Mabel Churchill, the children of Parrish's closest friend and neighbor, American author Winston Churchill (1871-1947). They are seated upon a cement wall that surrounded their home and garden, with a clearly breathtaking view in the distance. The family's property, designed by famed architect Charles Platt, was christened "Harlakenden," after wife Mabel Churchill's maiden name. The imposing entrance with its stone balls sited upon brick entry pillars was also incorporated into another one of Field's storybook illustrations in, The Sugar Plum Tree. Interestingly enough, on the family's property grew various fruit trees, including peach and plum. The famous and imposing estate was also at one time used as a vacation home for President and Mrs. Woodrow Wilson.

"A little peach in the orchard grew,

A little peach of emerald hue;

Warmed by the sun and wet by the dew,

One day, passing that orchard through,

That little peach dawned on the view

Of Johnny Jones and his sister Sue,

Up at that peach a club they threw,

Down from the stem on which it grew

Fell that peach of emerald hue.

John took a bite and Sue a chew,

And then the trouble began to brew,

Under the turf where the daisies grew

They planted John and his sister Sue,

And their little souls to the angels flew,

What of that peach of the emerald hue,

Warmed by the sun, and wet by the dew?

Ah, well, its mission on earth is through.

This illustration by Parrish of the poem, “The Little Peach” by Eugene Field, has a signature device frequently used by the painter:  two figures in profile framing a central space or scene.  It also contains one of his typical luminous skies above a dark, distant landscape, a style of composition originating in Renaissance portraiture.  The thoughtful boy and girl are very suggestive, as is the cloudy sky.  But what this suggests is withheld.  Ambiguity in art is an exceptional value, and this illustration evokes it beautifully.