This book illustration by Jessie Willcox Smith captures some of her best qualities at work. Through her pictures of children, whether illustrations for fairy tales, or of simple domestic scenes, Smith changed and grew the appreciation of children in American popular culture through her enormously empathetic portrayals.

This is an illustration for the book by Samuel McChord Crothers, The Children of Dickens, originally published in 1925. Bob Cratchit first appeared in Charles Dickens’ A Christmas Carol as the victimized clerk of cold-hearted Ebenezer Scrooge. Timothy Cratchit, also known as Tiny Tim is Bob’s youngest son, whose chronic disease forces him to walk with a crutch. His character is built as the antithesis of Scrooge’s and serves as a representative of the impoverished, yet strong-hearted, lower class during the Victorian era. When visited by the Ghost of Christmas Yet to Come, Scrooge realizes that he must change his ways and pay Bob Cratchit more generously in order for Tim to survive, later becoming a second father to him.

On November 1st, 2004, Sotheby’s put this Willcox-Smith illustration up for auction and sold to a fellow collector for $48,000. When the painting arrived at the collector’s home, he was “disturbed” to see that the painting had been significantly altered from the painting he thought he was purchasing.

The painting was cut down on both vertical sides of the panel, and actually removed a portion of Jessie Willcox Smith’s signature. The painting was accompanied by a copy of the book showing this illustration as the cover. A comparison of the painting and the book revealed the alterations done to the painting. The collector who decided to auction this painting in 2004 altered the painting to match the cover of the book they loved, but clearly did not properly report it to Sotheby’s causing the confusion.

After figuring out a resolution with Sotheby’s, the collector took the painting to get restored to its original condition. With the help of the restorer, the collector was able to recreate the missing areas of the painting that were cropped out from the original painting. The addition to the painting resulted in dimension change from 24.25” x 15.25” to 27.62” x 19.38”

We feel very fortunate to be able to bring to market a newly enhanced version of a masterpiece classic by Jessie Willcox Smith. Due to the improvements made by the previous owner, it’s worth has greatly appreciated. We are thankful for all the enhancements made by the prior owner.

To the best of our knowledge, this story is true. We cannot 100% guarantee it as there are still unknowns about this painting, but everything said by us we believe is accurate information. 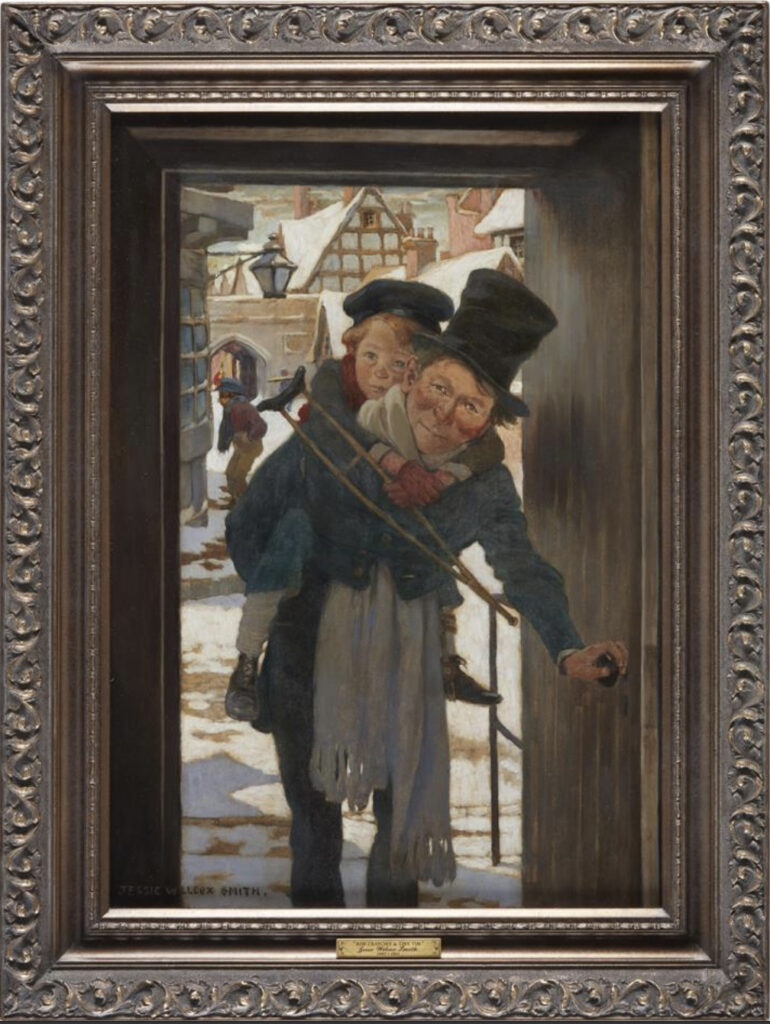